Despite the 7:30 start time listed on my ticket and on the venue website, opener Jane Weaver came on stage right at 7pm. She played some keyboards and was backed by a guitarist, a drummer, and a variety of preprogrammed synthesizers. Her style was heavily indebted to classic-era Stereolab, with a propulsive, snare-heavy rhythm and a trance-like shimmer. However, the music suffered from an oddly hampered energy, perhaps inflicted by a poor mix. The guitarist was nearly inaudible in most songs, and the low end was sorely lacking. A strong bassist would've given the songs a major boost. Weaver, despite being difficult to understand, was a strong vocalist, and the drummer was captivating, even though he lost three drumsticks during the last song. 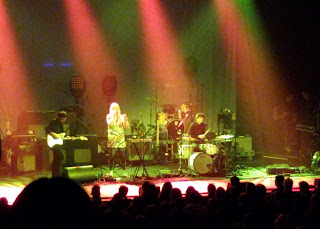 [Jane Weaver. I wasn't able to get any pictures of Belle & Sebastian, but they don't look that much differently than before.]

Belle & Sebastian started with the moving opener of their last album (Girls in Peacetime Want to Dance), "Nobody's Empire", again accompanied by the same type of YouTube-style slideshow as when I saw them last in Austin. They proceeded to alternate songs from their new EPs and classic tracks with a heavy emphasis on Dear Catastrophe Waitress (2003). The first deviation, "Sukie in the Graveyard" was the groovy success that it always is. However, "Piazza, New York Catcher", again played in a low-key full-band arrangement, remains an oddly overrated number in their catalog. (Seriously, why is that song the most-listened-to song by the band on Spotify? Is it just because it appeared on the Juno soundtrack?)

The band played five songs from the new EP series, more than most nights of the tour, yet still nothing from the last of the three, despite its release the day before the show. The new songs fit the mold of the band's modern style without advancing the bar too far. In fact, due to my relatively unfamiliarity with them, I briefly confused several with older songs. The melodies and arrangements felt familiar, which isn't to say that the songs aren't good, but most of them are interchangeable with their last couple albums. The exception was "Show Me the Sun", which prominently features an annoying "na na na" vocal hook, making it memorable for the wrong reasons.

The core six members of the band were again joined by Dave McGowan on guitar and bass; Sarah Willson on cello, keyboards, and flute; and CJ Camerieri on trumpet. All three also added occasional percussion. With nine people on stage that were generally all audible and clear, Belle & Sebastian must have a superb sound crew. The harmonies were consistently on point, and even the flutes were skillfully equalized and emphasized enough to be prominent and distinct.

"Dear Catastrophe Waitress" was introduced with a picture of the waitress in question, seemingly the same woman gracing the cover of the album of the same name. Stuart Murdoch recalled getting hit in the face with a pie by her at a show in Berlin circa 2002. He said he was sure that she was in the crowd again, and just as the song started, a woman that indeed looked very similar to the two pictures climbed on stage and danced with the band.

The same woman stayed on stage for "The Boy with the Arab Strap", and as per tradition, Stuart invited about a dozen audience members onto stage to dance with the rest of the band until the end of the set. "The Party Line", one of the best tracks from their last album, was given a strong showing, as was the classic "Like Dylan in the Movies".

No one was surprised that they came back for an encore, and after Stuart asked for requests from only the women of the crowd, they treated us to two more of their best. The superb "Judy and the Dream of Horses" was apparently the first thing Stuart heard. "I Want the World to Stop", the best track off Write About Love (2010), garnered a large number of shouts and was duly honored by the band.

The band managed to walk a fine line between the orchestrated folk of their early days and the well-produced, synthesizer-heavy pop of their recent work. They made them fit together as if they always belonged together, joined seamlessly by Stuart's wit and a large cast of talented performers. I miss the stronger emphasis on the string parts, but the flutes were still solid, and I'm also a fan of keyboards. By this point in their career, they perform as a well-honed unit. They performed songs from across their 22-year catalog nearly flawlessly. There was hardly a weak moment to be found, and even their least impressive songs are still far from bad.

P.S. Thanks to Alyssa!
Posted by Patrick at 9:35 AM No comments: