Despite being less than impressed by Brian Eno's installation at the ISM Hexadome, I returned again to the space to see what Thom Yorke and his partner in visual arts, Tarik Barri, had to offer. I came just as their installation was ending and thus just in time to catch the other team's work in full. 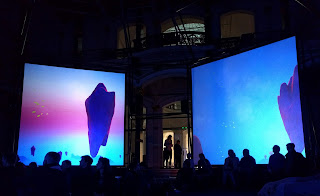 Pfandfinderei's visuals were nothing revolutionary, but they were fun and they certainly looked cool. They used three projections, each duplicated once. They started in a space setting before descending into an impressive cloudy region. That eventually cleared up to reveal a colorful moon-like landscape with occasional bursts of what looked like sliced lemon wedges. This was followed by a rather cheesy space city, a brief section of even cheesier graphs and charts (disappointingly not even synced to the music), and then a return to asteroids and space. While there was nothing unpredictable besides the lemons, most of the imagery simply looked great. 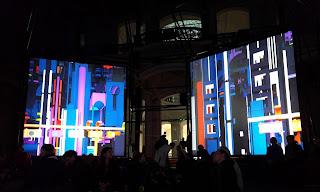 René Löwe's music was well-suited to the visuals. The style was fairly conventional faux-futuristic or pseudo-space-age electronica. There was a steady beat throughout and warm washes and pulses as befit the imagery. The music maintained a fairly regular energy level throughout, although there were a few dips during transitions and a loud swell near the end. Their installation lasted about 20 minutes, and I could've gladly absorbed more. 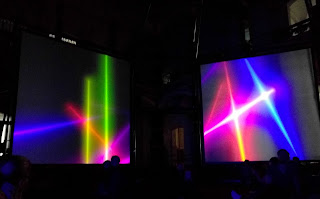 Tarik Barri and Thom Yorke started out much slower and lower-key. Barri's visuals were initially almost completely dark with only occasional spreads of yellowish light. Occasionally, a brief snatch of Yorke's face would appear. This may have been hampered by the fact that it was daytime and some light come in from outside, but there wasn't much to see. The switch to 90s screensaver-style colored light beams didn't help. After what seemed like a long time, things finally started to pick up when multiple copies of Yorke's face started appearing, often smeared and distorted by clouds of smoke. These effects were far more interesting than the rest of the visuals, but they didn't last long before being replaced with less exciting closeups and manipulations of Yorke's face. This gradually faded back to the initial light spreads and eventually into darkness. 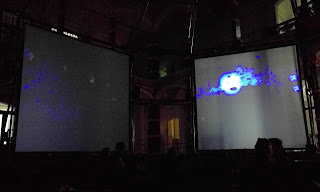 [Tarik Barri's replication of Thom Yorke's head with smoke effects. This was the best my phone camera could do; it looked significantly better in person.]

Yorke's music was similarly minimal for most of the installation. It started with sparse synth lines and simple repeated vocals phrases such as "in your headlights" and "I woke up with a feeling that I could not shake". While I thought the former might have been an allusion to Yorke's 1998 collaboration with Unkle, "Rabbit in Your Headlights", this was not pursued any further. Around the same time the visuals were building up, the music followed suit, with a bit of an actual beat and a more intense layer of vocals and cold synth lines.

Their installation lasted about 30 minutes and felt slow. I can appreciate a build-up, but I don't think that's quite what they were going for. I liked that they used all six projectors independently without repeating, although there was so little going on for most of it that they still felt underutilized. Yorke's music also took advantage of the web of speakers around and above the installation. While Eno's music sounded mono and Löwe's seemed to have just a slight sense of space, Yorke played around with throwing his voice around the sound stage. Combined with Barik's six-projector visuals, it made for a much more immersive experience. Unfortunately, that still didn't quite make up for the less exciting elements of their presentation. 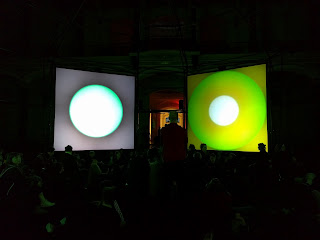 The Institute for Sound and Music is a new organization in Berlin devoted to honoring the creation of electronic music and sound. Their first large project is the Hexadome, an installation featuring six projectors and a network of speakers for which a series of artists have created unique works. Brian Eno's "Empty Formalism" is the first installation for the Hexadome. It opened on March 29th and runs until April 5th.

Eno's installation consisted two gradually changing visual patterns, each repeated on three projectors, and characteristic minimalist ambient music. The projections were mostly colorful concentric circles with subtle texture, occasionally interspersed with thick, straight bars. Close study revealed a minor lack of symmetry between the right and left sides, but this may have been unintentional. There was a hint of a line at about two-thirds the way up the projectors that was also presumably unintended. Otherwise there was little to discern. The music consisted of long, low drones, high-range tinkles, and occasional rumbles and washes. There was no beat or melody.

Eno described the work as meaningless by design, asking the audience to appreciate the visuals just for what they are, as is usually the case with music, as opposed to trying to "understand" the work, as is typically expected with visual art. While the notion is valid, the practical implication leaves something to be desired. I sat for an hour in a room with fifty other people, all staring blankly or appearing to meditate. There was nothing distasteful or offensive, but little to pull me in or hold my attention. It would've been pleasant or peaceful or even escapist if I could've erased my awareness of everyone around me. As it was, it was merely a mostly quiet, oddly lit, slightly awkward space that made for merely passable contemplation. 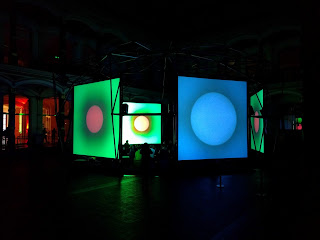