I ended up at this concert on something of a whim. My partner and I were in Szczecin for the weekend, and a friend of a friend suggested the concert when we got into town. It seemed like a chance worth taking, but when we arrived at the venue, the box office was already closed. Our companion asked an usher if there were still tickets. He disappeared and came back a minute later with free tickets for us. The advertised price was cheap, but nothing beats free!

The Filharmonia moved into a new building in 2014, a modernist building with subtle exterior lighting, a bright white foyer, and a gold-plated concert hall. The venue was host to the annual Choir Festival, which on this night featured the Novo Concertante Manila from the Philippines, conducted by Arwin Tan, and the Zielinski Singers from the USA, conducted by Richard Zielinski.

The twenty vocalists of the Novo Concertante Manila sang in mostly traditional styles, but they covered a variety of material in multiple languages. Their execution was well-honed and captivating. The diversity of the voices and the perfection of their harmony was incredible. Just when their set started to get slow, they performed a song that involved a loud click of the tongue by the men in the choir, which immediately restored my focus. They managed to earn an encore from the audience, for which they offered a traditional Polish piece that received a very warm welcome from the crowd.

The conductor of the Zielinski Singers, Richard Zielinski, is the director of choral studies at the University of Oklahoma in Norman, but he apparently worked in Szczecin in the past. The choir started with a couple haunting, modern, experimental pieces. I was immediately taken in. After this initial strong start, they gradually transitioned to traditional American folk tunes, hymns, and ultimately, gospel. The vocal performances were strong, but the material was less adventurous and the lyrics were uninteresting. To close the night, they invited the Novo Concertante Manila back to the stage. Together, they all sang a traditional Polish song for which the entire crowd reverentially stood up and sang along. The final number was a rousing gospel song with a country-inflected solo part.

I had never witnessed unaccompanied choirs of such skill before. I was thoroughly impressed, even if the songs themselves didn't always speak to me. I appreciated that the two choirs were rather different and that a diverse array of works were presented. Ending the show with two collaborative songs seems like an obvious choice in retrospect, but in the moment, it was a delightful and successful surprise. 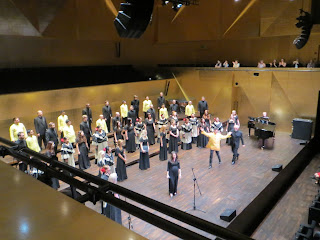