It's almost hard to believe I've made it this far in life without seeing Echo & the Bunnymen live. Coincidentally, the first album of theirs I bought was Ocean Rain right here in Berlin on my first visit in 2004. And they played on Halloween of all nights!

I didn't see any reference to an opening band, so I had no idea what to expect. After the bells stopped ringing, the lights went down, and the spotlight came on, I was surprised to see a single man surrounded by instruments. This was And They Spoke in Anthems from Belgium. His shtick was looping. He mostly stuck to guitar and vocals with occasional bits of organ and percussion. Unfortunately, his foot-tapping on the hi-hat with a tambourine was rarely in time, so it was more of distraction than anything. Otherwise, his songs were fine and the looping generally worked. The highlight was some classical or folk-styled guitar parts, particularly one where he looped a lead part to simulate double-stop thirds.

Half an hour later, the bells rang again, but it took another conspicuous 15 minutes for Echo & the Bunnymen meander on stage to the sound of a Gregorian chant, just like they used to in the old days. They even opened with the traditional choice of "Going Up". The band, nominally just Ian McCulloch and Will Sergeant, was augmented by Stephen Brannan on bass, Gordy Goudie on guitar, Nick Kilroe on drums, and Jez Wing on keyboards.

It quickly became apparent that they weren't planning on deviating from their typical sound and approach, despite that just weeks ago they released an album of orchestral rearrangements of some of their classic songs (The Stars, The Oceans & The Moon). I had half-expected that the band would be touring with strings players as a result. The album is exactly what you would expect: relatively tired and sappy versions of songs that don't stand of a chance of improving on the originals. The idea is obvious and not even executed particularly well. That said, the two new songs are actually decent.

At the concert, however, you might as well have not known that the new album exists. They made no mention of it whatsoever, and although the setlist is unsurprisingly similar to the album's tracklist, the renditions were essentially the classic arrangements that they've been playing since the beginning. The only exceptions to the standard mold were that Mac sang the updated lyrics to "Bedbugs and Ballyhoo" and they performed one of the new songs from the album, "The Somnambulist". Although it's a good song and it did fit in with the rest of the set, Mac's claim that "Everyone'll say that's a classic in twenty years" is probably unrealistic.

The only other surprises were the various teases of the band's favorite songs that they threw into the middle of "Villiers Terrace" and "Nothing Lasts Forever". However, even that wasn't really a surprise at all; they've been doing that practically since the beginning. Still, it's fun to see them do it live. Musically, they were consistently on point. The could hammer out these songs without even trying, but thankfully they still invest them with energy and strength. The fact that the setlist is so predictable is a bit disappointing, but at least the songs they do always play are a superb selection.

The biggest disappointment, however, was Mac's voice. For the most part, he still sings well enough, but he can't hit the notes like he used to. In "Never Stop", "The Cutter", and "Ocean Rain" in particular, he changed some of the melodies to a lower register. It seemed like he was trying to give his all for "The Cutter", but he couldn't quite make it each time and he sometimes opted for the easy route. On other songs, you could hear his voice stretch and fail. "The Killing Moon" was unfortunately the worst example. Most of the song was great, but I guess he figured he couldn't just skip the highest parts. He tried his best, but he just couldn't do it. In general, there was an element of power in his voice that was missing. The best Bunnymen songs feature sections where Mac would belt out in an almost unbelievably strong voice, and that just didn't quite happen.

For a band that got their start just about 40 years ago, though, they still have a lot to offer. The songs are as good as ever, and the fact that they are still able to throw a new one in the mix that isn't an obvious dud is reassuring. I wish they would've thrown in some more obscurities or simply played a longer set, but they lived up to their reputation of being a capable and well-honed band. 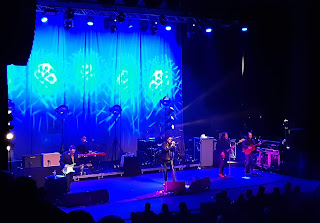 Scores:
And They Spoke in Anthems: C
Echo & the Bunnymen: B

P.S. Unfortunately, we weren't granted any special treats for Halloween. In fact, Mac claimed to "hate Halloween". I wasn't able to understand his explanation, though.
Posted by Patrick at 11:35 AM

Labels: 2018, And They Spoke in Anthems, Berlin, Echo & the Bunnymen, live review