Hans-Joachim Roedelius opened the show by talking about his autobiography and then playing a recording of a classical composition by an 18th century ancestor named Johann Christian Roedelius. He cited a contemporaneous review of this ancestral Roedelius that described his music as light, agreeable, and entertaining. I can't recall or convey the poetry of the original German as effectively as I'd like, but the somewhat condescending implication was that the music was not particularly arty or serious. The modern Roedelius delighted in the description and said that he hoped his own work could be described similarly.

Despite being surrounded by a keyboard, two laptops, and assorted other electronics, he spent most of the evening DJing CDs. I'm not even sure that everything he spun for us was by him! Most of the tunes were ambient or at least soothing and peaceful. However, one had a more sprightly drum machine that reminded me of Harmonia or Sowiesoso, and as the night drew on, more of his picks had pop and jazz rhythms and occasionally even vocals (from other performers). A couple tracks would've been called chillwave if they had been made today by someone a quarter of his age. The biggest surprise was a song with a hip-hop beat that featured German rapping from Roedelius! It was just a recording, but still: it was well executed and somehow not embarrassing.

When he wasn't working his walkmen, he read excerpts from his autobiography, played a few numbers on his keyboard, and shared some of his favorite poems (including at least one from himself). The texts varied from the existential and almost spiritual to a thorough run-down of every health problem he has suffered and an extended ode to his wife in honor of a birthday. Instead of an encore, he closed the show with a plea to create not just for oneself but for the betterment of each other and nature.

Over the course of the night, I gradually started to understand what Roedelius meant about living up the quote about his ancestor's music. Cluster and Harmonia were always more about mood and texture than any specific message or medium. I was also hardly surprised to learn that Roedelius worked as a masseur and physiotherapist before starting his musical career. He's well trained in relaxing people and putting them at ease. If one bit of meaning does escape from his music, it's the encouragement of connection to fellow humans and to the natural world.

Roedelius's show was unusual and yet a pleasure. I would've preferred a more active performance, but I can't blame an 84-year-old for taking it easy and telling stories. Besides, the show was cheap and the venue rather unintimidating. I liked the warm and positive tone he set, and his words carried depth and meaning (to the extent I could keep up with the German). I feel like I learned something from him. He said people often ask him if he feels old or whatever, but he said feels like he's been around forever, and he hoped we'd get to feel that, too! 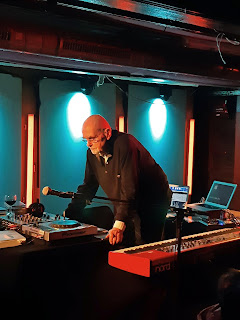 Admittedly, this show came up in my radar via Facebook. The tagline was "GIRLS - the reincarnation of a forgotten all-female-proto-Krautrock-showband from Southern Germany (1967-71). GIRLS - die experimentelle Tanzkapelle (1967/2019). GIRLS - the female source of Krautrock?" This is the power of well-targeted marketing: I was hooked immediately. I barely looked into the details beyond noticing that information about the original incarnation of the band was extremely scarce and that the show would be taking place in Marzahn, an outlying part of Berlin mostly known for its drab Plattenbau.

Finding the venue was a challenge in itself. After a seemingly endless tram ride, I exited into a massive yet deserted street in the rain and set off in what seemed like the right direction. A well-placed sign guided me to the rear of a building (on Frank-Zappa-Straße), but upon entering, I was left to wander the halls and stairs until I found the commotion and a person taking money.

When the band came on stage after an uncharacteristic 35-minute delay from the scheduled start time, I was given my first surprise: only one of the members was a woman, and none of them looked to be old enough to have been performing in 1967. However, as they lurched into their first song, "Nicht anfassen" ("Don't Touch"), I stopped worrying about the backstory and just got sucked in. 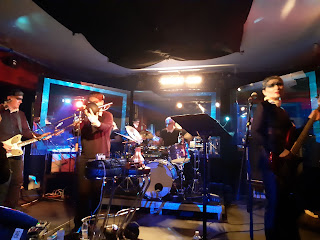 Of all the words in the tagline, the only one that was inarguably true was "experimentelle". The music was disassociative, noisy, and heavily influenced by dada. There were some bits of early Can-like Krautrock, although very little of the steady driving rhythm á la Kraftwerk or Neu! that one might expect when hearing that term thrown around. (Whether it counts as "proto" anything is debatable.)

Instead, drummer "Moon de Marzan" (Maurice de Martin) was fierce and dynamic. The bass of "Stella Mars" (Susanne Sachsse) was minimal and primarily purely rhythmic. Her vocals were mostly spoken or shouted with bilingual lyrics confronting commodification, societal norms, and gender roles. She competed for space with the trombone, trumpet, melodica, recorders, and various effects of "Vally Cloud" (Hilary Jeffery). These same effects often merged with the guitar effects of "Ida van Selbst" (Dirk Dresselhaus) to build a pulsing wall of sound. At other times, the music became sparse and scattered, with bursts of percussion or noise punctuating the tense silence. One song was basically doom. Another was a funk rip. Some bordered on free jazz. Their playfulness and unconventionality recalled Kleenex/Lilliput, and I was also reminded of the noise scene I used to see all the time when I lived in St. Louis. 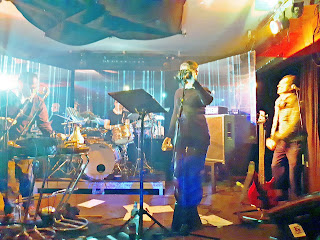 [With the "Man with the Gin" on guest vocals. Note Sachsse's plastic bag on her microphone, used to simulate a shaker.]

I thoroughly enjoyed the music I was presented with, and yet part of me also felt duped. On one hand, if they hadn't promoted themselves so deftly, I would've missed a delightful and unique concert experience. On the other, their presentation is a farce. Apparently Maurice de Martin is the son of the original band's drummer, and when she died at age 23, the band disintegrated. Their legacy supposedly consists of a badly damaged 20-minute cassette, a few reviews in local papers, some notes and journals, and the drumset that de Martin played on. While de Martin claims to have been heavily influenced by those remnants and the stories of his family, the rest of the contemporary band has no such connection. In fact, Sachsse claimed to know nothing about the original band's music except for what de Martin has told her. While I'm impressed that the band wanted to keep alive the memory of a fascinating historical oddity, their claim to be a "reincarnation" of the same band is rather tenuous. Myth-making is no joke, and the only reason I can't be mad about it is because it worked.

References:
The Facebook event
The Facebook page of the band
Local promotion of the band with most of the same information (German)
A taz article that actually digs quite a bit deeper and includes a photo of the original band (German)