I saw this concert more or less on a whim, knowing next to nothing about even the headliner.

The Indian Queen were a duo of just drums and guitar/vocals. Their style was hard, aggressive, and thrashy. The guitarist spent most of his time playing metal riffs with occasional breaks for strummed and/or muted sections with some shouted vocals. The drummer was propulsive and carefully followed the rhythmic breaks but offered few additional flairs. I could almost get into the intensity of it, but the vocals just weren't doing it for me. The guitarwork was impressive, but I can only get so much out of that technique, so most of what I appreciated was just the lock-in with the drums.

Drenge appeared in a more conventional rock format with a vocalist/guitarist, a lead guitarist/keyboardist, a bassist, and a drummer/vocalist. I was expecting something in the vein of garage rock or a bit of fun punk, and there were bits of both of those, but they started out by focusing on riffy hard rock and ended up going off in several directions. Most of these diversions were more interesting than their core rock sound. The large keyboard and effects rack was only used a few times, but always to good effect. Their mellower songs tended to be more expressive. One song could even have been categorized as sparse, and it was all the better for it. I again liked the energy they brought to the show, and the instrumental performances were good, but I still didn't find much to pull it together. The lyrics might've helped, but they were often drowned by guitars, and the sound system wasn't doing any favors. At least they could write some decent melodies, and the attempts at harmonies were pleasant when audible. 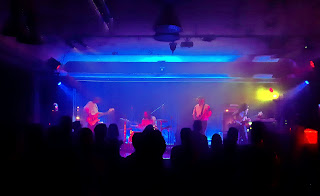 P.S. Thanks to Jochen and Matthew!
Posted by Patrick at 3:47 PM