I'm still only marginally aware of the connection between this concert and the Musikexpress magazine, but whatever, they threw a birthday party and invited three strong acts to perform on one stage. Calling it a festival is probably a bit ambitious, but whatever.

Yeasayer immediately gave me a Devo vibe, although it might've just been their focused stage presence and the bassist's red tracksuit. There was something mechanical, bizarre, entrancing, absurd, and precise about them as well, and the way they took R&B and funk grooves and mutated them into something danceable but unexpected also reminded me of Devo's famous streak of successful reinterpretations. None of it would have worked if the songwriting and performance hadn't been solid, though, and I was quite impressed.

The high points were the fretless bass, which was fluid, expressive, all over the place, and yet still always perfectly tight, and the vocals, which were almost always sung in harmony. All three core members sang, and they consistently nailed their parts, even when some segments featured minimal instrumental accompaniment. Before their last song, "Ambling Alp", they claimed that the lyrics mentioned the namesake of the venue, Max Schmeling, and I thought they might be joking, but it really does. That song also featured a heavy synth-like effect on the bass that rendered it completely unrecognizable, and it even featured a wild but superb solo! Meanwhile, they had psychedelic and frequently creepy projections mostly using images of the members' heads while presumably screaming. 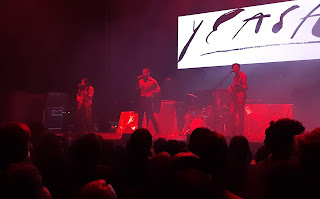 [Yeasayer. I unfortunately didn't get a good picture of the projections.]

Devonté Hynes' Blood Orange continued the trend of vocal prowess and harmonies, and took the R&B to another level, but otherwise was quite the opposite of Yeasayer. His sound was sparse and wispy despite the sizeable backing band (guitar/keyboards, bass, drums, sax, and two backing vocalists), and the mood was decidedly chill, casual, and thoroughly non-aggressive. The music was always danceable but still textured and nuanced enough for several of the performers to take brief solos. Hynes played a lot of keyboards but also frequently picked up a guitar and even busted out some decent lead bits. Most of his video projections were just people grooving, hanging out, and being stylish, although several inexplicably featured amateur drag racing footage. I appreciated the vulnerability and queerness that was otherwise present. 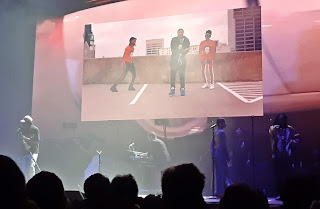 And then finally came Tame Impala, obviously the biggest draw for me. After being blown away by their thoroughly psychedelic set at Levitation in 2015, I was a bit let down by their lighter, more dance-oriented set later in the same year at Austin City Limits Festival. Currents (also 2015) hasn't really grown on me in the meantime, and their only other releases since then have been the deliberately pop-oriented singles "Patience" and "Borderline" earlier this year (okay, and a cover of "Confide in Me" on a Triple J compilation). The trend here is clear, and it doesn't really speak to me. But knowing that the band are supposedly working on a fourth record, and still holding out hope that they'll move in a more interesting direction, I had to take the chance. 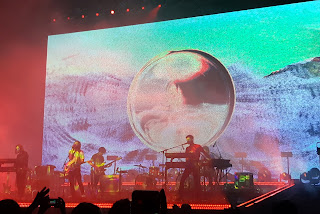 Unfortunately, my hopes were unfounded. Most of the set consisted of Currents songs, and along with the two new singles, the overwhelming sound was dance-heavy and poppy. There's absolutely nothing wrong with making dance-friendly music, but it came at the cost of the complexity of their arrangements and their free, improvisational jams. There was still a taste of psychedelia, even in the pop, but the guitar jam bliss was restricted. Other than "Sestri Levante", which is at least six years old and mostly a fixed part of "Mind Mischief" at this point, the only other real jam or improvisation was at the end of "Apocalypse Dreams". That was wisely chosen as a set closer, and it was probably the highlight of the night, but it was the only moment like that. (By comparison, at that 2015 Levitation set, at least half the songs had improvisational sections or extended instrumental surprises.)

It's not like their newer work is bad, though, and they thankfully skipped "'Cause I'm a Man", but I felt like the band were playing something static and pre-programmed, even though it appeared to be almost entirely live. There was a rigidity to it, like they no longer had the flexibility to throw in surprises. Again, a few songs like "Elephant" had brief moments of a diversion from the recorded version, but they were the same tricks as four years ago, and infrequent and brief enough to be easily overlooked. The presence of two drumsets and a separate percussion rig with congas led me to hope there might be some rhythm section workouts, but oddly the same drummer just switched from one set to the other for no apparent reason, and I only saw a guest percussionist at the other rig for one song ("Patience" if I recall correctly).

The worst crime was that the low end was overwhelmingly over-biased. I never thought I'd complain about the bass being too loud, but if this is what Kevin Parker meant when he's talked about trying to get his music played in clubs, then count me out. All texture and subtlety was lost in favor of earth-shaking low end vibrations. This was particularly apparent on the pre-recorded tapes played as the band walked out at the start and again for the encore. In both cases, the recordings were deafeningly and headache-inducingly loud in the low end.

On one hand, I appreciated that the band brought out "Led Zeppelin", a b-side from Lonerism (2012), but on the other, it was the only curveball from their back catalog in the whole set. Otherwise, all five other pre-Currents tracks were also played at both shows I saw in 2015. What happened to the rest of their songs?

If there was one particularly fun element, it was probably that for once I was down in the middle of the pit, and the laser light show was a delight from that perspective. Mixed with the heavy smoke machines, it made for an oil-on-water type of effect above our heads. At three points in the show, they released confetti cannons upon us, and combined with the lights, it made for some cool visual effects. I'll ignore the wastefulness and the cost of cleanup for the present, and I'm well aware that none of these tricks are new or unique to Tame Impala, but it was my first time experiencing them from such a central location, and that was admittedly enjoyable. 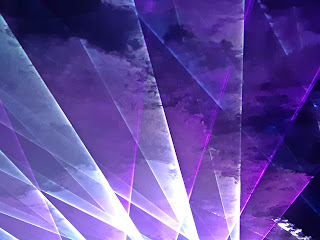 [The smoke and light effects.]

I'm still curious to hear where Tame Impala goes next, and I'm not sure I'll be so quick to jump on concert tickets next time around, but we'll see what happens!

Scores:
Yeasayer: A-
Blood Orange: B
Tame Impala: B-

P.S. This show was originally scheduled to take place in Parkbühne Wuhlheide, a large open-air amphitheater in the former East side. I've never been and was looking forward to it, but it was moved due to the demands of Tame Impala's light show. Oh well. Hard to complain about a venue that's walking distance from my apartment, though.
Posted by Patrick at 2:19 AM