After an incredible first day, I was quite excited for another day, although to be honest, there weren't any particular big draws for me. That wasn't going to stop me from making the most if it and taking some chances, though!

The first event of the day was a conversation with Alan McGee (of Creation Records) and Anton Newcombe (of Brian Jonestown Massacre), but I arrived just barely too late to catch any of it. I went to the Kesselhaus to see Saba Lou, the teenage daughter of King Khan who started recording with her dad at age 6. Her band had an old-school garage sound blended with soul. There was some groove and a bit of fuzz, but most of the songs were fairly easygoing. She had some charm and had a fun vibe, though. She brought her sister Bella up for one song. 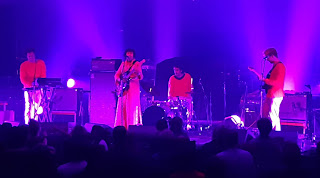 I went over to the smaller 8mm Stage to see Hello Pity, another Berlin band. From their studio recordings, I was expecting a mix of styles, in particular post-punk and psych. Instead, they stuck to a really heavy, doomy, dark sort of punk or rock. I liked the heavy rhythm, the dark energy of their noise, and that the guitarists and bassist traded vocals, but none of them were particularly gifted singers, and the music was too aggressive and indistinct for my taste. 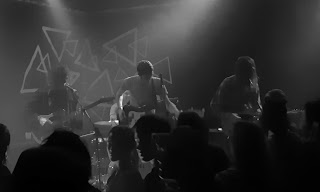 I left early and went to the Maschinenhaus to catch the last 20 minutes or so of 10000 Russos from Portugal. Coincidentally, they were also playing a swampy haze of darkness and sludge. The drummer handled vocals but I again wasn't impressed. I couldn't discern much complexity in the sound, just a dense morass. That was fine, but I was hoping for some of the shoegaze I heard from their recordings. 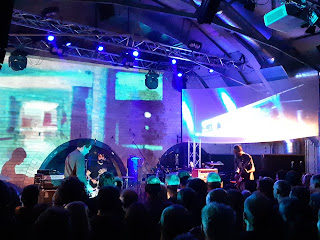 Next door in the Kesselhaus, The Black Lips had already gotten underway. They were playing something like garage rock, old-school bubblegum pop, or psychobilly, a bit like The Shivas. I liked their playful party vibe and their high energy, but they were dampened by a weak mix that rendered their vocals indecipherable. The lo-fi sound suited their aesthetic, but it didn't make for the best listening experience. They didn't seem to care; they were having too much fun. 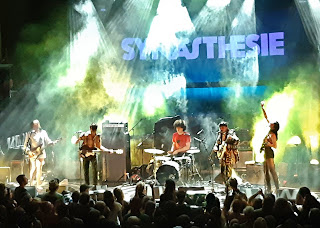 I went back to the Maschinenhaus to see Holygram, a darkwave band from Köln, but after almost a half-hour of waiting around, they still hadn't finished soundchecking, so I gave up on them. It's too bad; I think I would've liked them. Next up in the Kesselhaus was Deerhunter, who I've seen before but still haven't quite gotten into. However, this may have been the best set I've seen them play yet. 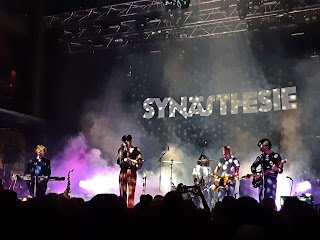 Bradford Cox seemed in a better mood than when I'd seen them before, which probably had a significant impact. He seemed to be enjoying himself and spoke exclusively in what he claimed was a Midlands accent (despite being from Georgia). In fact, he sounded oddly like Genesis P-Orridge, which is a fitting touchstone for the band. They maintained their off-kilter indie rock with psychedelic edges and added several nice sonic explorations. Guitarist Lockett Pundt again sang lead on one song. The highlight was the appearance of Emilio China on violin for several songs at the end. China was announced as the band's stage manager, although I recognized him as the excellent bassist and violinist from several of Peter Murphy's tours! 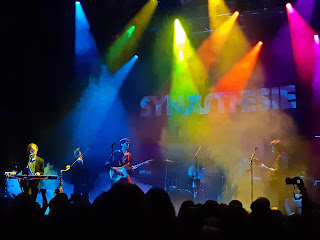 Once Deerhunter was over, I again went back to the Maschinenhaus to see what was up with Flamingods. However, they still hadn't started playing, and ended up being 25 minutes late. They were playing hypnotic and groovy psychedelia that had some promise, but it was so crowded that I had to bail. I once again returned to the Kesselhaus to see the final act of the night, A Place to Bury Strangers. Their sound was dark, aggressive, and very heavy. I like some noise rock, but something about APTBS was just too much for me. The guitarist and bassist kept throwing their instruments around and just thrashing about, and I just wasn't feeling that sort of energy. I left before the end.

Final Thoughts: I ended up having something of a disappointing second day, especially in contrast to the first. I liked everything I saw on the first day, but on this day, only Deerhunter really impressed me, although Saba Lou was good, too. The rest was all just too heavy for me. (This is a surprise even for me; I used to be all about Nine Inch Nails and The Sisters of Mercy.) Part of the problem was that the sound quality just wasn't great. It was fine for most of the first day (although I did complain about it during Stereolab's set), but almost nothing sounded optimal on this day. Particularly in the Kesselhaus, the sound was boomy, and in every room, vocals were always hard to discern. Perhaps related, it was also quite annoying that the schedule in the Maschinenhaus was running so late that I missed one band entirely and most of another.

Despite those complaints, I feel ridiculously lucky to live so near to a festival dedicated to Kosmische Musik and psychedelia. How in the world did that work out!? Even if it wasn't all perfect, I'm still quite impressed with the robust lineup. The choice of venue was also quite cool. I'm not sure how I missed out on this festival in past years, but I'll be paying attention next year!