I'd seen Holy Wave twice before at festivals in Austin and enjoyed them quite a bit, so when I heard they were coming to Berlin for the first time, I was immediately curious.

Soft Crystals, a Berlin-based Scottish band, opened the show. They played a chill, rather minimalist indie rock. They were tight with a steady rhythm and groove, and while the songs were simple, every element was played with finesse. The guitarist generally kept his tone clean and didn't overwhelm the stage, letting the keyboards and bass share just as much space. This pattern shifted slightly on the third song, when the guitarist unexpectedly took a brief solo with a psychedelic edge underlain with heavy phasing and reverb. Each subsequent song also had a solo, usually brief and melodic, but occasionally leading back into psychedelic territory. The vocals benefited from some harmony parts from the keyboards. Their unpretentious demeanor was deceptive and they played a strong set. 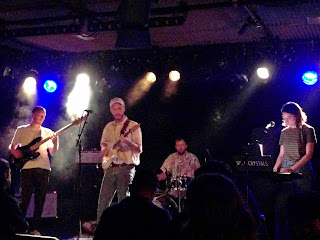 Holy Wave, based in Austin but originally from El Paso, continued in their vein of heavy psych jams with touches of classic 60s tones and modern sounds akin to the Brian Jonestown Massacre. I've been hearing a lot of people making references to My Bloody Valentine about their recent work, and while there are traces, I think Holy Wave are less shoegaze and more indebted to the garage rock that begat the original psychedelia. This is particularly evident in the band's earlier records, but they've maintained garage elements even in their newest album. 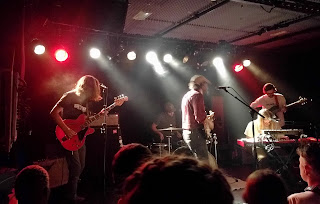 Their set ran the gamut of psychedelic territory, including trance drones, unsophisticated rave-ups, bits of synthesizer experimentation, heavy jams, organ-heavy pseudo-pop, and nuanced dual-guitar interplay. Some songs dragged, and the vocals weren't as strong as on record, but there was plenty of compelling material to keep me engaged. As their set came to a close, they brought things to a peak with a couple really strong, high-energy psych jams, and I was sad to see them go after just about an hour. Thankfully, they came back for an encore of two more lengthy songs of similar style and caliber.

Even if few of their songs stand out on their own, the sum of their sound is generally a consistent pleasure. It's nice to have a periodic reminder of the wonderful sounds of Austin that I got to hear so much of when I lived there. 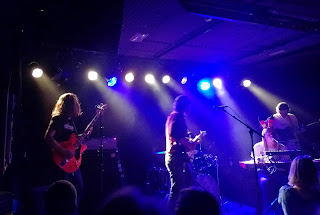 [What's with the bunny ears with the German national colors!?]

Scores:
Soft Crystals: B+
Holy Wave: B+
Posted by Patrick at 5:19 AM No comments: