I had the good fortune to see Boogarins three times in Austin at various festivals while I lived there. They seem to be constantly growing and changing, so they were always worth taking a chance on. Although their second album, Manual (2015), didn't initially appeal to me as much as their first, As Plantas Que Curam (2013), it has grown on me in the meantime, and their latest album, Lá Vem a Morte (2017, reissued in "deluxe" form with three bonus tracks in 2018), is a delightful collage of psychedelic sound. 11€ seemed like a bargain to see them headline a show in a compact venue.

Unsurprisingly, the opener was another psychedelic band: Love'n'Joy from Ukraine. They were a three-piece with a garage rock foundation and a load of riffs and harmonies. The English lyrics that I could understand were nothing special, but they sure managed to make the music translate effectively. All three musicians were solid performers and held their own. This was put to the test when the guitarist broke a string and the bassist and drummer carried on and jammed on their own for a bit. The guitarist ended up just grabbing a different guitar (which turned out to be one of Boogarins'), but something went wrong with the cables or pedals and he ended up playing most of the next song plugged directly into the amp. It's practically a joke that some bands would sound completely mundane if the effects were removed, but thankfully Love'n'Joy mostly still worked even without the pedals. They kept it together and showed no sign of weakness despite the troubles. I was impressed. 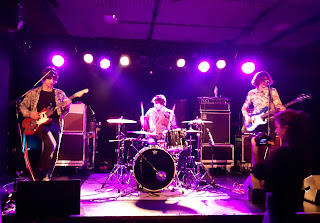 The core of Boogarins' music has remained constant: melodic psychedelic rock with intertwined guitar work, Portuguese lyrics, and a healthy dose of experimentation. Lá Vem a Morte brings the experimental characteristics to the fore, but unlike some of the jam sections of the last show of theirs I saw, the record is focused, cohesive, and surprisingly bright. The propulsive drumming of Ynaiã Benthroldo was also given more room to shine.

However, I honestly wasn't sure how the new album would translate to the stage. Thankfully, they pulled it off quite successfully. Benthroldo's drumming retained a prominent place, particularly in songs like "Foimal", but his energy made the entire setlist groove, and his improvisational ability was essential for the jam sections. Bassist Raphael Vaz lent an electronic edge by playing most of the new songs on a keyboard. Dinho Almeida and Benke Ferraz kept their traditional roles, but they've only continued to expand their skill of playing off each other's parts. Almeida's rhythm guitar parts were often bouncy and dynamic enough that in another band they could be the lead part. Ferraz's lead guitar just jumped off from there. I was happy to see him singing more harmonies again as well.

Their set opened per tradition with a jam that I didn't recognize [Edit 2019.07.31: turns out it was an early version of "Te Quero Longe"], and from there they jumped all over their catalog, frequently rearannging and extending the songs along the way. "LVCO 4", a quite new song from the reissue of Lá Vem a Morte, was a surprisingly restrained and sparse number, although a few parts of their various jams had similarly minimalist breakdowns. "Lá Vem a Morte", which appeared on the album in three parts, each quite cacophonous and scatterbrained, was performed in a nine-minute continuous version. It still shifted from section to section, but it was focused more on the guitar jams instead of the samples and noise from the record. It was a highlight.

The house lights and music came on after "Onda Negra", but the band hadn't even been on stage for an hour. Thankfully, the crowd and band convinced the venue to let them carry on. The crowd had repeatedly and enthusiastically requested the song "San Lorenzo", and the band finally obliged, although Almeida had to struggle to remember the guitar part in the middle. He figured it out after a few tries, and the audience cheered him on instead of grumbling or jeering.

They played a strong set, and the show felt full and fulfilling despite being shorter than I expected. I liked the mix of songs and the many changes they made to the songs to adapt them to the stage. Even the new songs felt like they were retooled and reworked to keep them interesting and impressive without studio effects and samples. The only weak moments were when some of the sparser sections dragged on a bit too long, and I was surprised that they closed the show with such a section. Instead of building up to a big finish, the gradually worked their way down until there was nothing left to remove. I hoped they might come back for a brief second encore to do one more rocker, but that was it. 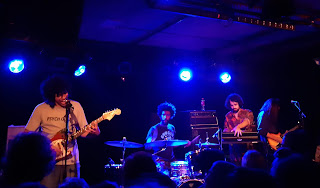