Similar to my experience with Fehlfarben, one of my first reviews on this blog was of my favorite album by The Human League, Travelogue (Dare comes second!), and it took until now for me to finally get a chance to see them live. Of course, the band that recorded Travelogue only shares one member with the current lineup, but it still seemed worth a shot.

When I read that the opening band was Shelter, I was expecting the American Krishnacore band. It seemed like a strange combination, but you never know with these things. When I showed up, I was instead presented with a British electronic pop duo featuring a singer that addressed the crowd in fluent German. I liked the queer vibes I got from them, but that was about it. The songs sounded like they were written by stealing one bit of a song by New Order, Gary Numan, or Depeche Mode, and then using that as the only hook. The lyrics were bland and the music just made me wish for the real thing. The singer was decent, but most of the music and backing vocals were programmed. I kind of wished I'd seen the hardcore band instead.

The Human League appeared as a six piece: original singer Philip Oakey, Dare-era backing vocalists Joanne Catherall and Susan Ann Sulley, two keyboard players (Nic and Ben), and Rob Barton on electronic drums. Off to the side of the stage was David Beevers, their sound engineer, who was important enough to receive an introduction by Philip along with the others. Both keyboard players came onstage with keytars, so clearly things were off to a good start. 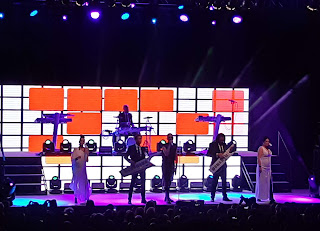 I had no idea of what to expect from the concert. Unsurprisingly, they played half of Dare along with both subsequent non-album singles, all of which were well done even if predictable. Otherwise, they played various singles from throughout their career, of which some were markedly better than others. "One Man in My Heart" was a welcome opportunity for Sulley to take the lead, but the song itself was not a winner. "Behind the Mask", on the other hand, was a compelling reminder of the band's collaboration with Yellow Magic Orchestra.

"Don't You Want Me" was naturally the closer of the main set, but the instrumentalists led an extended intro with an opportunity for the crowd to sing a round of the refrain before the singers came back on stage. I was particularly curious what they would offer for an encore after already playing their biggest hits. The answer was "Being Boiled", the only song they played from the original incarnation of the band. It's a weird song, but I still like it, and it was markedly heavier than anything else they played. The last song was "Together in Electric Dreams", originally a collaboration by Oakey and Giorgio Moroder for the Electric Dreams soundtrack. Naturally, it fits right into the Human League mold, and the crowd was into it.

From what I could tell, almost everything was performed live. One of the keyboardists even played a guitar for a couple of the songs! Oakey's vocals were still quite strong, and while no one ever pretended that Catherall and Sulley were virtuosos, their vocals were solid additions. I wish they'd been a bit higher in the mix at times, though. While the backstory of the women's addition to the band still sounds bizarre today, I've got to hand it to them that they've stuck with the band ever since they joined in 1980. It'd be a lot weirder if it didn't work.

The band clearly tries to fight the notion of being a boring synth band just standing statically behind their rigs. Oakey kept active and ran all over the stage. Catherall and Sulley were both in constant motion, swaying and dancing on the sides. (All three also had a few costume changes throughout the night.) The drumkit and keytars also helped with the movement on stage. And true to tradition, they had a massive array of video screens. The visuals were sometimes bits of their music videos but often just weird pseudo-sci-fi imagery or scenes from old video games (e.g. Pac-Man) and movies (e.g. Tron). The weirdest was for "Together in Electric Dreams": 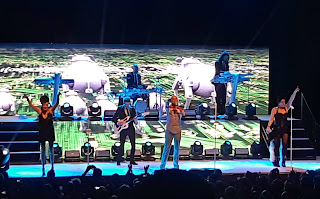 [Are those mechanical sheep with telephones for heads?]

Despite the many things the band did right, there was still something missing from the show. Although they did their best to keep the attention of the audience, there was something a bit too easy, clean, and predictable about it all. They leaned hard on the pop side of their catalog, but their presentation lacked depth. I appreciate the politically charged nature of some of their songs, but many were straightforward and uncomplicated. It felt a bit too cheesy at times, like the audience was being pandered to. Where were the experimental elements? The willful weirdness? Obviously, I wanted more from Travelogue, but that's not the last album in their career to feature experimentation and exploration. I liked what I heard, but I was hoping for more.