I was only recently tuned into Barbara Morgenstern, and when I learned she'd be playing a show with Britta at a great venue in my neighborhood, I was sold. Britta, oddly enough, entered my awareness many years ago at the height of my Smiths fandom thanks to their delightful "Wie ein Smith-Song" [sic].

As if the co-headliners weren't enough, they still had an opening act: Mint Mind. Fronted by guitarist/vocalist Rick McPhail (perhaps better known as part of Tocotronic), they played a slightly scuzzy blend of old-school garage rock and punk. They reminded me a bit of 80s Sonic Youth but with less of a political angle. The lyrics I could follow were mostly about motorcycles and similar rock 'n' roll fare with only mildly wry deviations. I liked the vaguely psychedelic drone of the guitar fuzz, but I found it a bit odd that in lieu of a bassist, they had a second guitarist that almost exclusively played bass riffs. The cover of Billy Bragg's "A New England" was pleasant if unexciting, and the closing number was an amusing take on the Sesame Street tune "I Don't Want to Live on the Moon". 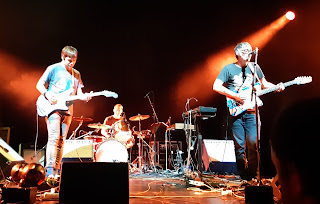 Barbara Morgenstern appeared on stage accompanied by Christian Biegai on baritone sax. She played a keyboard to the beat of a drum machine, but also added some effects, loops, and processing to build up the sound. (Biegai did some of the same as well.) She focused on songs from her latest album, Unschuld und Verwüstung, but whereas the studio recordings are heavily electronic and a bit cold, the live renditions felt a bit warmer and more human, perhaps closer to the sound of her earlier albums. This impression was emphasized by her animated and excited demeanor. I appreciated the lyrics I could understand and I liked the subtle (and occasionally unsubtle) touches that Beigai's bari sax added. Some of the instrumental passages went on a bit long, but Morgenstern's keyboard skills and vocals were impressive and well-matched with her electronic production. 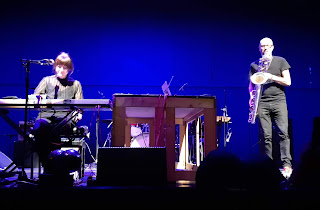 I'm still not entirely sure what I like so much about Britta, but they strike some sort of chord that works for me. They're a bit simple and unrefined, yet they have a subtle charm. Their music is approachable and instantly familiar. Maybe I just like their style of social commentary. At any rate, they were a bit loose on stage, but they seemed to be having fun with it, and musically it still worked. Vocalist/guitarist Christiane Rösinger was humorous but unapologetic. Barbara Wagner mostly played rhythm guitar, which left enough room for Julie Miess' bass (and occasional keyboards) to fill a lot of harmonic space, and thankfully she was up to the task. The core trio was rounded out by the energetic and precise Sebastian Vogel on drums. They didn't offer "Wie ein Smith-Song", but of course they played their signature tune, "Lichtjahre voraus", which is still just as relevant today as it was in 2003. I didn't catch any new songs, but if this reunion is for real, I wonder where it will lead them. It might not be Rock am Ring or Rock am See, but I hope they stay an active unit. 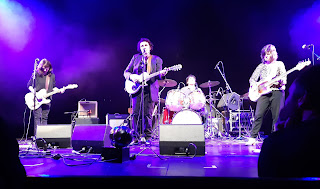