The last time I saw Boogarins in Berlin, the opening band was a perfect match and really impressed me. When I heard that Love'n'Joy would be playing their own show at a bar in my neighborhood, it seemed like a nice opportunity to see them play with less concern about time constraints.

The Ukrainian trio again appeared with a deceptively simple stage arrangement and initially focused on material from their recent album, Bender on the Silk Road. Their psychedelic rock was just as entrancing as before, and with a huge projection and an enthusiastic crowd, they seemed to be having a great time. The venue was small but crowded, and their sound was big enough to fill the space. However, the sound quality wasn't great, and some of the harmonies and other details were hard to make out clearly.

Halfway through their set, they asked if they could play one more, and after a playing a long jam with extended solos, they again asked to play another. This pattern continued for several increasingly humorous iterations, and each time it seemed like the songs got longer. They also got a bit heavier and more riff-oriented, as if they were reverting to garage rock. The style was simpler, but they still played tightly and rocked out enjoyably enough. 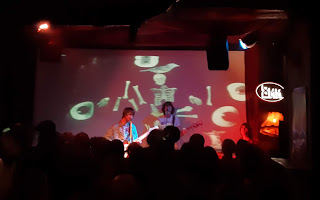 P.S. Thanks to Jochen!