Almost exactly two years ago, I saw ChameleonsVox in Berlin, just days before I signed a job contract and finally put the steps in motion to move here. It was a great show and I was quite excited about the prospect of living in Germany again. I think I've not been shy about my love for this town, and I've managed to see a lot of good music in a mere two years here, so that show was a good sign of things to come. Nonetheless, I actually considered skipping this show, since it started late (10:30pm!) on the other side of town, but I'm glad I followed my instincts and went anyway.

First Encore:
11. Monkeyland
12. Second Skin [including a tease of The Beatles' "Please Please Me"]

I somehow missed the memo that this tour was specifically a tribute to Strange Times (1986), The Chameleons' third and final album from their original incarnation. Normally my first reaction to full-album performances is to cringe a bit, but it seems to be increasingly popular and I can admit that at times it does work. In this case, I wasn't about to complain: Strange Times is one of my all-time favorite albums! One of my first reviews twelve years ago was of the album, which I gave an A+.

Based on my experience the last time I saw ChameleonsVox (and every live recording I've heard from any version of the band), I wasn't at all worried if the band could do the album justice. The original sequencing of the album was excellent, and the band were able to translate it to the stage quite successfully. The ups and downs of the upbeat, driving songs like "Mad Jack", "Soul in Isolation", "Swamp Thing", and "In Answer" contrasted nicely with the more ethereal and contemplative songs like "Caution", "Tears", "Seriocity", and "Childhood". "I'll Remember" kept its place as a beautifully pulsing closure, although the brief cacophonous end of the album was left out.

Thankfully, the band were touring with a keyboardist, Danny Ashberry, so the many keyboard layers that were absent when I saw them in 2017 were rightfully restored. Longtime collaborator Yves Altana was not present, but Stephen Rice was a suitable replacement on drums. Chris Oliver and Neil Dwerryhouse returned on guitars, and of course Mark Burgess still leads the lot on bass and vocals.

There were some subtle differences in the performance to the original recordings. Burgess kept up his regular tradition of throwing bits of his favorite songs (mostly Beatles and Bowie) into his own, and he also again played with some of the lyrics for more topical relevance. Most notably, "Soul in Isolation" on this occasion featured the lyric "Lost in a Brexit wilderness of pain / And all our leaders are insane". Musically, "Tears" was performed somewhat closer to the original acoustic arrangement, but with electric guitars. It also featured an unfortunately rather annoying keyboard sample throughout it. Additionally, the verses of "Seriocity" were done with more prominent drums but without the distinctive strummed bass chords (or even any bass at all, in fact).

The band gave us two encores with two songs each. Three of the songs were from the first album, Script of the Bridge (1983), and "Nostalgia" was the b-side of their first single in 1981. These are all good songs, and they were played with a great deal of energy and enthusiasm, but I do wonder why they deviated from other recent setlists, which have frequently included "Paradiso" (a b-side of "Tears") and "Tomorrow Never Knows" (a cover of The Beatles' song released as a b-side of "Mad Jack"). They also avoided anything from the Where in the World EP (2017), which included new versions of a Strange Times outtake and two tracks originally from the Tony Fletcher Fletcher Walked on Water EP (1987). It would've been cool to see some of the other songs from the same era performed live.

That said, I'm not at all disappointed with what they did play. "Swamp Thing" might be my favorite Chameleons song these days, and they tore into it and had the audience singing along. (Burgess oddly claimed it was inspired by the fall of the Berlin Wall, despite that it was written before that happened, although he's also said before that he "regard[s] it as a true prophesy".) "Tears" is another astounding song in any arrangement. There was no song that they performed that they didn't do justice to. Even if full-album performances might be a gimmick, no one can be upset with hearing one of their absolute favorite albums played in full on stage with such passion and commitment. 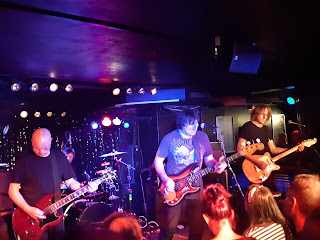