I wasn't going to write a review of this show. I mean, I already reviewed Ian's show at Prachtwerk the night before. In fact, I didn't even realize at first it would be a concert per se. But I made an offhand comment about Theodor Shitstorm that was apparently amusing enough to warrant putting it in print. (Or, well, publishing it on the internet, whatever.)

This was a casual event in a literal garage, and apparently it wasn't decided in advance who would play first. Ultimately, it was Ian Fisher, who played an abbreviated but similar set to what he and the band played the night before. As if Prachtwerk wasn't already an intimate enough venue, this felt even more up-close and personal. The sound quality wasn't exactly stellar, but it was good enough, and the band might have played even better than the night before. I would've gladly heard some more new material or assorted throwbacks, but the Idle Hands songs are a strong set, and the band can translate them to the stage quite effectively, regardless of the environment. 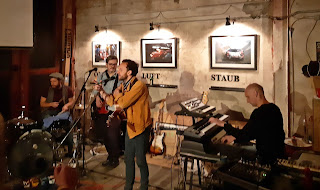 Theodor Shitstorm also appeared as a four-piece with guitar, bass, drums, and keyboards. However, both Desiree Klaeukens and Dietrich Brüggemann shared lead vocal duties, and Dietrich played a keytar for rhythm parts and a melodica for lead parts. The style was all over the place, with bits of indie rock, folk, punk, old school rock 'n' roll, traditional Liedermacher tunes, and even a playful touch of Schlager. They not only covered Reinhard Mey's "Selig sind die Verrückten" ("Blessed Are the Insane"), but performed a great original song named "Mama, schick mir die Platten von Reinhard Mey" ("Mama, Send Me the Records from Reinhard May"). Most of their songs featured a sort of deadpan delivery of personal and political storytelling with clever twists. I appreciated their subtle playfulness and humor (to the extent I could understand it!) and I felt just a bit brighter after experiencing their set.

And for the record, my extemporaneous comment was that Theodor Shitstorm sounded like punk if it grew up into something useful. But don't get me wrong, I still like a fair share of punk music! 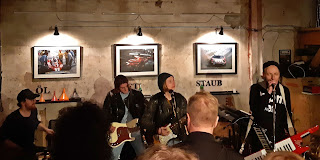