Yes, I went. Despite my decidedly negative assessment of Corgan's behavior and politics of late, I couldn't resist the allure of a show with James Iha in the fold. The ugly publicity of the feud with D'arcy is quite embarrassing, but the fact that even Iha was able to reconcile with Corgan seemed like news enough. Whatever. I went.

Opening act Fangclub were so bland that the less I say, the better. They played a generic brand of alternative hard rock that left me entirely unenthused. The novelty of seeing any band in a Renaissance fortress with a moat was far more exciting than the actual band itself.

The Smashing Pumpkins came out loud and strong with "Siva". Corgan, Iha, and Iha's longtime replacement Jeff Schroeder all played guitars. Each took a solo. Iha played his old parts and even sang the backing bits in the chorus. It almost felt like the old days, except that instead of D'arcy's spite and attitude, there was just Jack Bates, quietly pretending not to be the son of Peter Hook, and then there was the whole thing with the extra guitarist. At least Chamberlin was holding it down again.

For "Rhinoceros", Katie Cole came out to sit behind a keyboard and sing backing parts. It was nice to see that another of Corgan's latter-day acolytes had stayed in the fold long enough to last through two international tours (she played bass at the show I saw in Austin in 2016), but it was hard to tell how much she was actually playing live. (Bates has apparently been playing with the band since 2015, but he wasn't at that 2016 show.) She stayed out for most of the show, but not for every song. 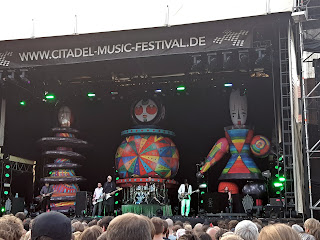 The focus of the attention was Iha. He was as shy as ever, yet he did most of the talking. Corgan remained conspicuously quiet until the encore, but Iha periodically addressed the audience throughout the night. No one else said a word. Iha played almost all of his original parts on the old songs, including the oft-forgotten backing vocals. He even got to take the lead for a delightful and endearing cover of The Cure's "Friday I'm in Love". He occasionally teased Cure covers in the 90s, and took the lead on the studio recording of "A Night Like This" in 1996, but there was something exciting and redemptive about this. Corgan even stepped off stage, and Cole filled in on acoustic guitar and backing vocals.

The band played three songs from their new album, Shiny and Oh So Bright, Vol. 1 / LP: No Past. No Future. No Sun. (2018), and I was actually impressed by the live renditions. The album isn't great, but it's certainly better than the pedestrian artifice of Monuments to an Elegy (2014) and feels like less of a deliberate attempt to evoke Siamese Dream (1993) than Oceania (2012). The band did a better job of making the songs come alive with three solid guitarists than the album did.

However, all of the other post-reunification songs ("G.L.O.W.", "Superchrist", and "Tiberius") were less compelling, and Iha had little to add to them. In fact, most of the songs were poorly optimized for three guitars. In particular, "Eye", "The Everlasting Gaze", and "Ava Adore" were all really well done, but there just wasn't really a need for three guitars. Rather too often, the guitars just became a morass of thickly distorted riffs. A mediocre mix and a strong wind probably weren't helping. On the other hand, several songs featured wonderful ebow parts from Iha, including "Alienation". And "Today" was richer than most prior live versions thanks to the third guitar that could play the extra parts from the studio version.

The biggest deviation from the other post-reunification shows I've seen was how willing Corgan was to share the spotlight. In addition to hardly talking and letting Iha take the lead on "Friday I'm in Love", he shared the lead guitar parts fairly equally with Iha and Schroeder, and on several songs he didn't play any instrument at all. The balance of power felt somewhat more equal.

In fact, the whole show seemed surprisingly natural and unforced. The band seemed the most comfortable and confident that they've been since reunifying. In the other shows I've seen, I got a strong impression that Corgan had something to prove. In 2008 in St. Louis, he was trying to reclaim his most beloved legacy after a series of failed side projects. In 2012 in St. Louis, Corgan desperately wanted to prove his new lineup could make a good album. In 2016 in Austin, he showed off his songwriting craft, his skill with arrangement, and the breadth of his career. This time, he was more at ease and less concerned with making a statement. Perhaps having three of the original four members on hand was enough to let the music stand on its own.

That 2016 show was impressive because of how much ground it covered, but like the two shows I saw before that, the band were unable to end the show on a high note. This time around, they finally did it. They played a ton of great songs and just about every big single. In fact, I was just a tad disappointed that they didn't play more deep cuts! When it came time for the encore, I couldn't think of any of their hits that they hadn't already played. Then they played "Muzzle", their best song that should've been a single. It was a perfect choice.

The Smashing Pumpkins are messy. They are far from perfect, and their reunification has been quite flawed. But this is the closest they've come yet to doing something that feels genuine, and the latest album is tolerable. This was the most consistent show of theirs I've seen, even if it was fairly predictable. I suspect I have Iha to thank. And even if only for that, it was worth it. 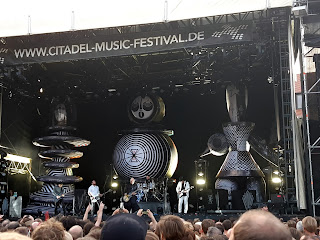 [Edit 2019.08.11: P.S. This show was bootlegged and is available for download here, although the quality is unfortunately rather poor.]
Posted by Patrick at 4:49 PM