Amazingly, Boogarins were back in Berlin after playing here just last November!

Carnivore Club appeared unassuming at first: just two musicians, one on guitar and one behind a keyboard. I got a heavy 80s synthpop vibe, but they had a slight extra edge in that the keyboardist hit a drum pad for the snare. The rest of the percussion and some of the rhythm parts appeared to be programmed, but that one bit of live percussion made a difference. They reminded me of the early, darker side of New Order. However, their penultimate song was notably more pop, and I think they were on to something with that one. It featured sampled vocal harmonies, which was a bit awkward in that it felt like karaoke, but it helped give the impression that the song was even bigger than it was. Their final song was built around a metal riff, but unfortunately they didn't do much with it. I liked their willingness to play around with their sound, though, and I think they have some real promise. 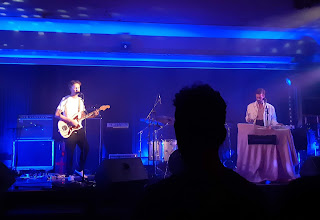 Since their last show in Berlin, Boogarins released their fourth album, Sombrou Dúvida. It continues the electronic experimentation of Lá Vem a Morte (2017) but is a bit less chaotic and more diverse in sound and rhythm. They played most of the new album as well as about half of Lá Vem a Morte. Despite the new material, the concert felt fairly similar to the previous one, but considering how good that show was, that's not at all a bad thing.

In fact, this show may have been even better. The more expansive sonic palette of the new material broadened the horizon of the live show. Benke Ferraz sang lead on more songs, and even bassist Raphael Vaz took the lead on "Polução Noturna". Vaz spent even more time playing keyboards than before, again widening the spectrum of the band. The band didn't try to reproduce the sample-heavy cacophony of songs like "Lá Vem a Morte", which was performed as a brief, guitar-oriented instrumental that merely linked other songs together. Instead, they relied on the individual virtuosity of each member and an appreciation for basic guitar and synthesizer effects to drive their sound.

In fact, that method of merging songs and subtly segueing from one to the next was a hallmark of the show. If you weren't keeping track, it was easy to overlook these transitions and assume the band were playing long, continuous jams. And in a sense, they were. The pacing of the slower, sparser songs between the heavy workouts was such that when one joined to the next it often felt natural enough that it could've been written and recorded that way in the first place.

That said, while most of their songs featured some improvisation, it was the three older songs that were most drastically rearranged into extended jams. "Tempo" began especially quiet and open with long pauses between Dinho Almeida's individual lines. He was clearly just having fun and teasing us. The song still inevitably broke into the bigger choruses, and at some point it finally launched into a wild jam. "Lucifernandis", again the only song they played from their debut album, As Plantas Que Curam (2013), was another starting point for an extended jam sequence that was mostly based around "Auchma", originally the brief closing number from Manual (2015), but regularly rearranged into a much longer and heavier exercise. 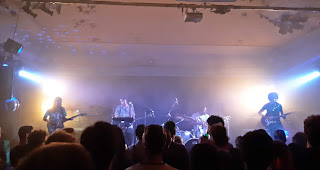 Even if the new songs weren't quite as jam-oriented, the guitarwork from Boogarins is always solid, and there was even more room for Vaz and drummer Ynaiã Benthroldo to contribute to the sound. The newer songs are more fully-formed and rounded out; instead of just two guitarists exploring their instruments, the collaboration of all four members is more readily apparent. As a result, they sound big, pulsing, groovy, and always full of surprises.

Scores:
Carnivore Club: B
Boogarins: A