I happen to live on a street with an annual Straßenfest (street party). It's pretty awesome. I've been to a number of Straßenfeste, Volksfeste, Dorffeste, and so on over the years, and they usually feature music, but I rarely pay enough attention or feel inspired enough to write anything up. At last year's Choriner Straßenfest, I was mostly focused on hanging out with my fellow attendees. This year, I paid a bit more attention to the music.

I still didn't see every act of the day, and there was karaoke on the corner with Oderberger Straße for most of the evening. I'm only going to cover what I saw. First was Koueme, an African singer-songwriter with just a guitar, set up under the awning of Buchhandlung Mundo Azul. He switched between English, German, and at least one African language. His songs were pleasant but plain. One of his final numbers was a cover of "Let It Be", which he was able to do justice to, but I preferred his own songs. Unfortunately, his last number was a bit overshadowed by the soundcheck from the main stage.

After taking a break, I went back out later to eat an awesome saffron rice dish from a Persian food truck and listen to Bando Berlin. Their tagline was "Hardcore Percussion / Industrial bis Worldmusic", and that's a pretty accurate description. Their only instruments were large barrels, or what are called "drums" in the business world, and they were loud. They were tight, though, and they varied their rhythms and style just enough to keep it interesting. If they had played any longer, I probably would have been over it. The rest of audience (or at least those for whom it wasn't too loud) seemed to be loving it. I guess all you need really is just a good beat.

After another break, I went back out and saw most of the set from the Bolschewistische Kurkapelle Schwarz-Rot. I recalled that they also played last year, and they are apparently an institution. They formed in 1986 in East Berlin, when playing songs as socially and politically critical as they did probably wasn't looked too fondly upon. Their members mostly played traditional brass instruments (as one would expect from a proper Kurkapelle) but mixed in guitar, bass, and drums. Similarly, their material was a balance of traditional folk, light classical, jazz, and modern alternative music. Their strangest song was a cover of "Der Fuehrer's Face", which I only later realized was an anti-Nazi song from the Donald Duck propaganda short film. The highlight was a high-charged cover of Ideal's "Rote Liebe".

Not bad for a party right outside my window! 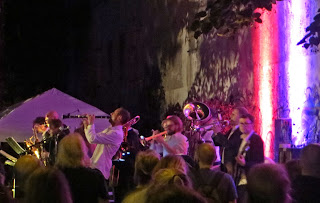 P.S. Thanks to Alyssa, Isabelle, Silly, Uwe, Rachel, and Kamyon!
Posted by Patrick at 10:53 AM