My third time seeing Wilco after great shows at Austin City Limits Festival and Stubb's in Austin. Their new album, Ode to Joy, is due out on October 4th, so all the new songs were unfamiliar to me except for the early single "Love Is Everywhere (Beware)".

Opening band Spiral Stairs is actually the solo project of former Pavement member Scott Kannberg. Despite his length indie rock credentials, he appeared with an acoustic guitar, accompanied only by Tim Regan on lead guitar. Kannberg twice made jokes about them being Christian neurosurgeons. No explanation was provided, but who knows, in an alternative universe, maybe it could've been. At any rate, without a rhythm section, the songs fell a little flat. Regan did a great job filling out the songs with melodic riffs and tasteful solos, but Kannberg's voice wasn't too sharp, and it felt like he was trying to sing the songs as if they were intended to be bigger than they were. The political lyrics were good, though. I felt a little bad when he said he was going to play a Pavement song ("Two States") and hardly anyone responded when he asked if anyone remembered the band. 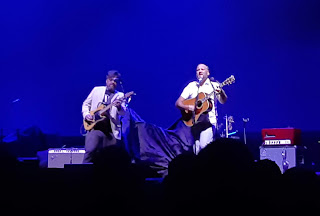 Wilco started their set with two new songs, both of which were low-key and relatively unadorned. I was concerned that they might again be pulling the full-album trick as they did last time I saw them, but thankfully they broke the pattern with the delightfully oddball "Company in My Back" and the shimmering, tuneful "War on War". The band scattered new songs throughout the whole set, and although I wasn't initially impressed, they seemed to improve as the night went on. The new material seems to fit in with much of Star Wars (2015) and Schmilco (2016) in particular, in that a lot of the songs sound downcast, subtly and loosely arranged, and oriented around Jeff Tweedy's obscure but idiosyncratically humorous perspective.

The rest of set bounced all around Wilco's career, collecting exactly one song from almost every album they've released, plus an abundance of songs from Yankee Hotel Foxtrot (2002) and especially A Ghost Is Born (2004). Those are great albums, so I wasn't upset about it, but the bias was extreme, and I was surprised by the lack of material from their recent albums. I liked the front half of Star Wars quite well, and I never saw Wilco tour Schmilco. Somehow, "If I Ever Was a Child" is already something of a classic, and I was surprised to hear some of the audience singing along.

Highlights were the triple-guitar attack of "Handshake Drugs" and the clearly beloved "Impossible Germany", the wild cacophonous dynamics of "Via Chicago", the plaintively beautiful "Reservations", the awesome bells-and-guitar solo of "Bull Black Nova", and the perennial classics "Jesus, Etc." and "California Stars". The biggest surprise was "True Love Will Find You in the End", presumably played in honor of Daniel Johnston's passing the day before.

Even if not all the new material blew me away, I still liked the way Wilco were able to blend the songs into their long setlist. They never lost steam and balanced the softer and quieter numbers with plenty of high-energy rockers. Many of their songs appear in most of their setlists, but their songs are varied and plentiful enough that they can play endless variations and it never gets old. I didn't find this show to be especially different than the core of the last time I saw them, but it was different enough to still be compelling, and I've thoroughly enjoyed them every time I've seen them. All six members remain strong performers, and I like that each gets their moments to shine. 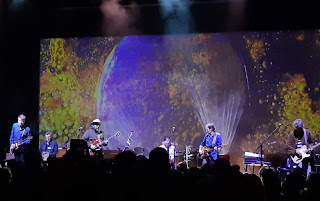