This was a busy day for me. I was late to this show because I spent the afternoon at the Arena Finale. I even skipped the final band of that to make it to this. However, one of the opening bands, Sturle Dagsland, had to cancel due to missing luggage, and I arrived just after Stereocilia left the stage. (Too bad, because they seemed cool.)

Sunn Trio is a disarmingly literal name: they are a trio from Phoenix, Arizona, one of the sunniest places on the planet. Their riff-laden, metal-adjacent desert/surf rock was entirely instrumental. The drummer laid down forceful rhythms, the bassist threw heavy riffs around that, and the guitarist played winding leads on top. The thick reverb, reverse swell, and other effects on the guitar gave it a psychedelic tinge. Their set was intense and they barely paused for breath, which made it an entrancing affair. The bass tone was rendered a bit dull, but otherwise they sounded great. 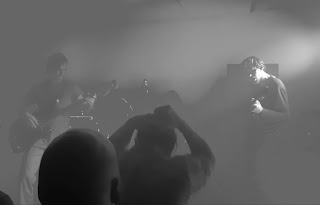 I went outside to fetch a beer and went back inside just in time to catch Acid Mothers Temple & The Melting Paraiso U.F.O. start their set early. The ever-evolving, always shifting lineup consisted of five members at this show. Band leader and guitarist Kawabata Makoto played some mellow riffs but spent most of the night playing incendiary solos. Jyonson Tsu started out on bouzouki and switched to guitar for most of the show. He was nominally the lead singer, but largely focused on instrumental parts. Drummer Satoshima Nani and bassist S/T (aka Wolf) generally kept quite busy between dishing out uptempo motorik rhythms and holding down freeform jams. Higashi Hiroshi's synthesizer was like a shimmering sprinkle on top; he mostly created high-pitch whirring and bubbling flourishes that decorated whatever else was going on.

They started with a strong, rhythmic jolt that blasted off into a wild guitar solo and followed that up with one of the only quieter segments of the night. Most of the set leaned more towards lengthy songs with a few relatively traditionally structured parts intermixed with extended solos and kosmische jams. The boundaries between one song and the next weren't always clear, and most seemed to stretch on for at least ten minutes.

The music was great, but the one thing holding it back was a mediocre mix. The bass was again muddy and dulled, the vocals were almost completely overwhelmed except for the infrequent mellow moments, and even Tsu's guitar was often lost somewhere in the shadows. The delicacy of Hiroshi's synth bits led me to believe they'd spent some time fine-tuning that aspect, but something was missing from the rest.

Much like Sunn Trio before them, Acid Mothers Temple played with gleeful abandon and relentless energy. Their intensity was such that when they stopped after about 75 minutes, I was thrilled but ready for a break. Unfortunately, they didn't come back for an encore, despite that according to the schedule they still had a half-hour before "curfew". I would've gladly gone on another trip with them. 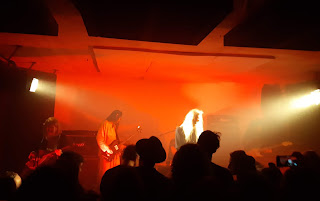