This has to be one of the strangest, only-in-Berlin events I've been to, and best of all, it was completely free and open to the public. In fact, it took place on a nondescript square between a WWII-era bunker, a huge apartment complex, and a busy intersection. The focus of the event was the Arena, a sculpture by Benoît Maubrey consisting of old speakers, some of which were still functional and wired together. Apparently the general public is welcome to use it, and on this occasion, a sound tech was present with a proper rig for the day's performers.

Unsurprisingly, due to technical problems, the event was running way behind schedule. I arrived to see Cabuwazi, some sort of circus troupe, juggling and playing with kids while a local radio personality played excerpts from StreetUniverCity about respect and civil courage. Eventually, moderator Martin Clausen handed over the stage to Doc Schoko, who started his set with an extended instrumental piece featuring an ebow on his guitar. He then switched to more traditionally-structured songs with a punk edge. Clausen joined him on sax for several songs. 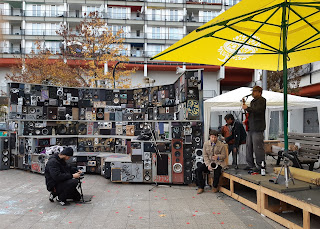 Henning Sedlmeier briefly took the stage with Carsten Lisecki to perform an ironic song about the future. Carsten played maracas and injected some vocal parts (mostly "Zukunft!", meaning "future") while Henning mostly stood still and sang in disaffected tone along with a backing track. This was apparently an introduction of sorts to a discussion round about art in public spaces and the commercialization and capitalization of art. The central figure was Bazon Brock, an elder artist/critic/theorist/professor, but Henning and Carsten also took part in addition to Beatrice Schuett Moumdjian and Ina Weber in their roles as artists and performers. The setup was particularly odd in that the guest speakers sat inside a nearby neighborhood management office and projected images on the window, but the sound came from the speaker sculpture outside.

Sedlmeier concluded the discussion with another ironically disaffected song about consumer culture (the key word being "Dinge", meaning "things"), and then Michael Schmacke came forward for his set. Schmacke also played to a backing track and in fact let it do most of the auditory work. While it played mutated electronic beats, he put on a psychedelic paisley outfit and moved about while pulling props (like a small globe and a doll) out of a bag. He only occasionally sang sparse lines such as, "Read between the stones", after which he bent down and pointed at the spaces between the tiled pavement. For one piece, he threatened to eat a grasshopper, but thankfully didn't actually follow through. He concluded his bizarre set by climbing up the Arena sculpture and gazing into the distance. 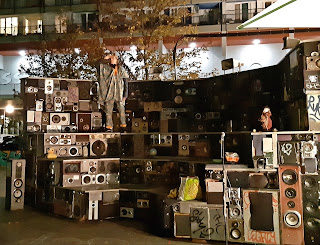 Next came poet and singer/songwriter Lutz Steinbrück, who performed five songs with solo electric guitar. Darkness had fallen and he was suffering from the cold and wind, but persevered nonetheless. His focus was on shifting rhythms and contemplative lyrics, and he continued the prevailing themes of the day with a song about the ills of capitalism. As I was running late for another concert, I had to leave after his set and I missed the final act of the night, Flirren. 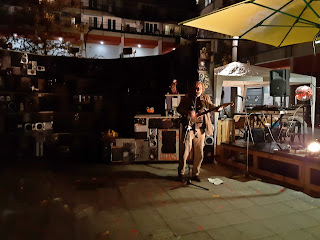 I remain continually impressed when I encounter events like this that are sponsored by various segments of the government. I cannot imagine a similar event – combining public art, children's activities, musical performers, and a roundtable discussion of art – taking place in the USA, funded by government money. It was weird but intriguing, and all I had to do was show up. The only downside (other than the delays) was that someone thought it would be cool to detonate loud fireworks nearby. In was unclear whether this was protest or pure prankery. Despite the obvious illegality, though, everyone just shook their heads and moved on. Naturally, police where nowhere to be found and no one was concerned enough to summon them.