It’s rare that I come across a new song where the individual elements of the music, lyrics, and video all blow me away. Cremant Ding Dong only have four songs to their credit so far, but they’ve already found their stride. Their new single “Es muss nicht immer alles wachsen” is their best yet.

First, the music: it’s solid synthpop with loads of great sounds and angular guitar bits. It’s upbeat and energetic with a well-constructed arrangement. Even better are the lyrics. The whole thing is a humorous takedown of capitalist arguments in an era of big business obliviousness to human suffering. The title and chorus translates to “not everything has to always grow”, and the rest of the lyrics describe things that don’t really need to grow forever (businesses, markets, power, toe nails, capital) as well as a few things that should keep growing (flowers, children, hair, love, trust). It’s clever, playful, and insightful all at once.

And then there’s the video! It’s pure joy. The most notable feature is an adorable cat, but it’s also full of whimsical visual effects and colors. The band is present, but focus more on grooving and playing around than on showing off their individual looks or expensive equipment. A synthesizer makes a brief appearance, and a few shots appear to be from a performance on a stage (such a foreign concept!), but the emphasis is more on movement and color.

The single is available on Bandcamp here and the video can be seen here. The rest of the band’s songs are in a similar style and are also quite good, in particular “Testergebnis”, a song about waiting for Coronavirus test results. 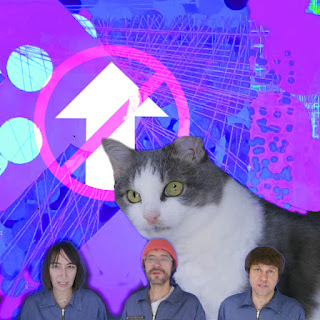 P.S. Thanks to Lutz for the tip!

I’d like to share the lyrics to the Sea State 12 album that has now seen the light of day. My last post introduced the album, and I’d like to shed a bit more light on it here.

The eight songs of the album were developed collaboratively regardless of who brought the original ideas. This was the first time that I wrote songs that someone else sang the lead on, and I’m incredibly pleased with how well Susan was able to express what my voice just couldn’t muster. Susan and I both had a lot to say and we clearly had some things we needed to get off our chests. Nonetheless, we tried to have fun with it, and we hope it’s a transformative and cathartic experience for the listener in the same way it was for us.

I owe a huge debt of gratitude for Susan for making these songs and this whole project a reality. We made the music as a band, but the fact that you can listen to it now is in large part due to her efforts to make it happen. I also need to profusely thank Luann; she obviously also played a huge role here, and her pulse, spirit, and enthusiasm are what drive a lot of this music. Great thanks are also owed to Derek, John, and Carter for their collaboration and contributions, and Jim, Scott, Sylvia, and Steve for taking our raw sound and turning into something that anyone else might want to hear. All of these people have made sense of the messy ideas that were brought to the table and worked with them until they became something worth hearing.
And now to the lyrics!

Don’t get upset, this is just the start
If you think it’s bad now, it’ll only get worse

Look at each other, just pay attention
Stop what you’re doing, put down your cell phone!

Something is broken, we’ve got it all wrong
We shouldn’t be here, we can do more

The intended meaning of “genderfree” is “freedom of gender”, as in, “liberate your gender”. I’ve always wanted to write an anthem about rejecting the constraints of conventional gender roles, and this isn’t the first time I tried.

Trapped! Trapped! Do you feel constrained?
Detained! Restrained! Do you feel held back?
Attack! Fight back! Does it make you sick?
A trick! A trick! Do you want something more?
A bore! What for! Oh, tell me what’s the use
Abuse! Abuse! I refuse to play
The game! A name! I don’t need the words
It’s forced! Of course! Let’s begin anew

Why are we stuck here where we are?
Despite our choices we only pick from two
Let your imagination loose
There’s a spectrum (or a field) of possibilities
So do as you please, no one to appease

There’s a mask that you wear someone else put there
Didn’t matter how you felt, it’s the hand that you were dealt
This is where you’ll fit, it’s all that you will get
Throw a fit, make a scene, you’ll just seem obscene
In a world full of chance, there’s only skirts and pants
Despite what they say, there’s no room for play
Stray from the track, you will be attacked
They talk about choice, but you don’t have a voice

Well, I stood and I tried to think of
What had just happened, how I was not hurt
Picked myself up
Pulled myself in shape, sat down on the curb
While I looked around
Heart was racing fast, I could hardly speak
A stranger walked up
Tried to make amends, where to even start
If I only knew
I’d say it right away, I wouldn’t hesitate
If I only knew, I wouldn’t wait a blink

It’s the strangest thing
To see it happen as you hit
It’s beyond control
It’s up to the laws of physics
Your feet, they still move
And now you are somehow standing
It’s hard to believe
Despite your attempts to prevent

What did you think would happen here?
Bring all your guns, all of your gear
Raise up the pressure, feel the heat
Scare all the people down on the street

There’s room for you
Fill me up

There’s room for you
Feel me up

Some people understand, some don’t
They’ll try to hold your hand, I won’t
Cause I don’t let anyone unmake me

It’s written on your arms, it’s comin’ from your lips
The sound of your apocalypse
Notes on your guitar, lies that you tell
Blue is the color you make, when you wail

And where you goin’ now, you wonder
Rollin’ through your mind it sound like thunder
Only thing that matter, callin’ you

So you take it on the road, but can’t hide
The reflection in the mirror, you know it don’t lie
Glass has shattered, you’ve fallen through

It’s been about five years in the making, but the album from my last band in Austin is finally out! 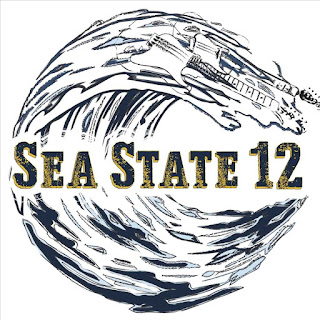 Susan, Luann, and I started the band in 2014 as Sea State Six. We immediately set about writing our own material and while we seemed to gravitate to heavy and serious matters, there was always some playfulness in there, too. Most of the album was recorded between 2015 and 2017, but a wrench was thrown in the works when I decamped to move to Berlin. I owe a lot to Susan for still seeing it through from there.

We had the pleasure and fortune of collaborating with several people along the way to getting the music recorded in its final form, and I’d like to thank all of them, including Derek Young, John Hammond, Carter Arrington, James Williamson, Scott Love, Sylvia Massy, and Steve Turnidge.

For the curious, I played bass and I was the primary songwriter of the first five songs (coincidentally). Susan sang, played rhythm guitar, and wrote the other three songs. Luann played drums and was our gifted arranger. Carter played the lead guitar on the record.

I’d like to find a good place to share the lyrics, but for now, I’ll let the music speak for itself. Enjoy!