Recently I reviewed Cocteau Twins’ Lullabies to Violaine, Volume 1 and all of their 80s albums on 4AD. Both of those were a pure delight to write because I love that music so much. However, my original intent was actually just to write this review of Treasure Hiding, a recent compilation that covers (almost) all of their music from the 90s on Fontana. When I started making notes, I realized it’d be even more fun to write about the rest, so I went ahead and did that. Now it’s finally time for Treasure Hiding, which contains their last two albums, all of the related b-sides and EPs (also compiled on Lullabies to Violaine, Volume 2), two compilation tracks, and their final two BBC sessions (previously released as part of the BBC Sessions compilation in 1999). This period saw some turbulence for the band, and while the music wasn’t as consistently excellent, there are still some great parts. 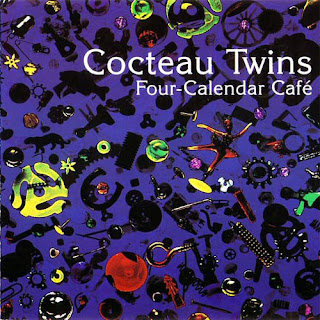 Four-Calendar Café, released in October 1993, was the first Cocteau Twins album on Fontana after a break of three years. It’s surprisingly straight, like they were trying to be more conventional without completely giving up on their idiosyncrasies. It seems they couldn’t help some weirdness creeping in, but the production sounds more explicitly dated to the 90s. Musically, it’s sparser, airier, slower, lighter, and less expansive than previous records. Some parts recall their previous forays into ambient and acoustic music (Victorialand and The Moon and the Melodies, both from 1986). The biggest surprise is that Liz Fraser’s lyrics are almost all understandable, and they are perhaps not what one would expect! The words are shamelessly honest and direct. Her lyrics confront emotional turmoil head on, and one can only assume she’s singing about her breakup with Robin Guthrie. It must’ve been weird for the band, but she really goes for it! She doesn’t say anything particularly embarrassing, but the sincerity and earnestness is disarming. It’s like witnessing a therapy session. That said, most of the time it’s not that much different than Heaven or Las Vegas: some words will filter in and out of your ear, but most of it doesn’t stick and it all sounds pretty anyway. The bits that do stick are enough to make you think and wonder and maybe even relate, but you have to really focus to catch it all. And if you don’t focus, the music is still fairly good. It’s unfortunate that it mostly stands out in that it doesn’t stand out much; the music is subtle and restrained compared to previous albums. “Bluebeard” is a decent single, and I love the “are you toxic for me?” line. “Evangeline” is a bit drab and languid, especially for a single, but the background space effects are cool. “Summerhead” and the end of “Pur” are some of the only bursts of energy. The rest sort of melts together. 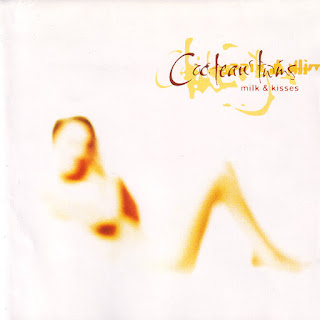 Their final album was Milk & Kisses from March 1996, and it sounds a bit more like what you might expect from the Cocteaus. It’s somewhere between their classic style and Four-Calendar Cafe. It’s notably thicker, deeper, and richer than the previous album, though. It’s modern and melodious, but also lush and full. It’s still not as inventive as their best work, and it again too often sounds like a product of the times, but at least the result is satisfying. The vocals and lyrics are also in between their heyday and Café; some are quite clear and distinct, but others are totally obfuscated and whimsical. The lyrics still seem influenced by the breakup, but the passage of time added depth and maturity that was lacking before. The lyrics are a touch less direct and emotional. “Violaine” starts the album off with awesome pseudo-reversed vocals. It’s almost like a rap, and in combination with the music, it sounds delightfully weird but unique. “Serpentskirt” is great, too, with its vibrance and the awesome change two-thirds in. “Tishbite” is breezy pop, but still better than most of Four-Calendar Cafe. “Half-Gifts” has a carousel waltz feel, but doesn’t take develop it. “Calfskin Smack” rests on warm beds of vocals, and the groovy alternate section and the guitar harmony solo are elaborately excellent. “Ups” is a showcase of Fraser’s best birdcalls and vocal technique even if the music is relatively straightforward. “Treasure Hiding” builds nicely, and “Seekers Who Are Lovers” is pretty good, too, so it starts and ends on strong notes, just like their other best albums. 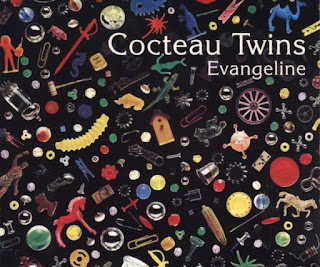 The rest of of Treasure Hiding consists of the singles, EPs, and BBC sessions from the same period as the aforementioned albums. First are the two b-sides of “Evangeline”, released just before Four-Calendar Café in September 1993. Both sound like the b-sides they are; they are quite similar to the album. “Mud and Dark” is a classical metaphor, but musically it’s actually better than the average track on the album. “Summer-Blink” is unexceptional but for the very direct lyrics that verge on oversharing. 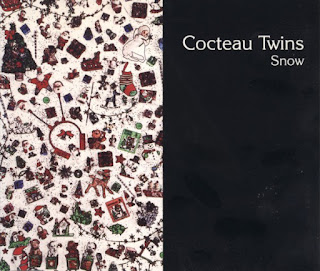 Next is the Snow EP from December 1993. In a truly unexpected move, Cocteau Twins released this brief EP with two traditional Christmas covers. It’s quite cheesy and more than a bit weird. It’s especially jarring in juxtaposition with the direct lyrics that they finally embraced in the rest of their music from this era. Both songs start out deceptively like classic Cocteaus for a few seconds before suddenly shifting. “Winter Wonderland” is especially cheesy and too straight. “Frosty the Snowman” is better, both in terms of arrangement and suitability for the band. 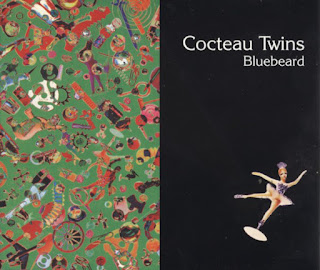 Then came the “Bluebeard” single from February 1994 with the last of the Four-Calendar Café outtakes. “Three Swept” and “Ice Pulse” are both again lyrically quite brutally honest and musically not their best. The acoustic version of “Bluebeard” is fine, but only marginally different than the album version and lacking in energy. 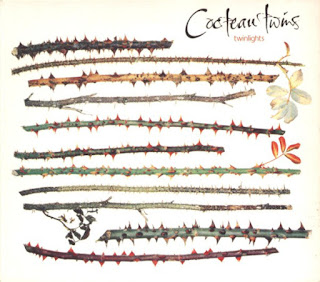 The Twinlights and Otherness EPs from 1995 might look at first glance like a throwback to the glory days of frequent EPs without parent albums, but the contents aren’t quite up to that par. Twinlights came first in September. All four tracks are merely acoustic versions of songs done better elsewhere. Two were previews of tracks from Milk & Kisses, which was still six months away at the time, but in retrospect, they don’t have much going for them. It’s all very sparse and light, which means Liz’s voice really takes the focus, but the music is wanting. “Pink Orange Red” is of course a classic, and this version is quite different from 1985 Tiny Dynamite EP version, but it can’t compete with the original. “Golden-Vein” fits in with the rest but was unreleased in any other version except the Radcliffe session, which is actually slightly better. 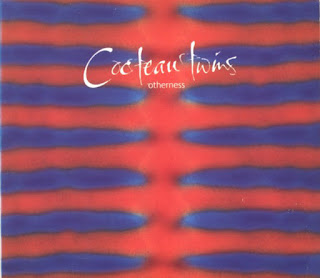 Otherness followed in October 1995. This time the catch was that it’s a remix EP. All four tracks were remixed by Mark Clifford from Seefeel. All are mostly instrumental and quite washed out. The EP draws from ambient, dub, and chill techno, but the result ends up sounding like a pile of generic 90s electronica clichés. Again, two tracks are previews of Milk & Kisses songs and none are from Four-Calendar Café, but the other two are older. “Feet Like Fins” (from Victorialand) is at least an interesting choice, and it’s the best of the bunch, but still not actually good. Much like the acoustic versions on Twinlights, Otherness just leaves you wanting more. The four early versions of Milk & Kisses tracks might have been exciting at the time, but that doesn’t matter now. 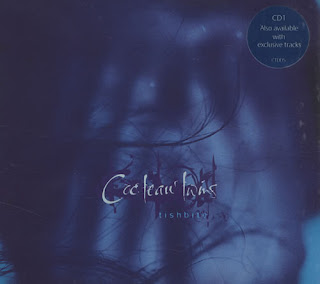 Treasure Hiding includes the “single version” of “Tishbite” from March 1996, but it’s just an edit with nothing else to show for it. The b-sides are all fairly sparse and open with mostly obscured lyrics. They fit with Milk & Kisses, but are lighter, less direct, and comparatively insubstantial. Much like the other latter-day singles, “Tishbite” itself is good, but the rest is second-rate. 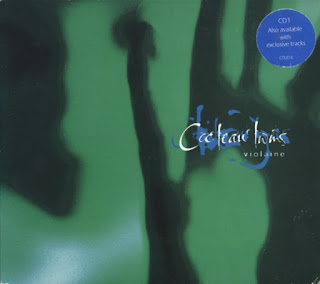 The “Violaine” single from July 1996 is finally a bit more interesting. The b-sides of the first CD single version are both sparse and second-rate like the “Tishbite” b-sides, but the CD2 b-sides both shine. “Circling Girl” is a bit bigger and sounds more like a traditional Cocteaus song. “Alice” is quite cool, with great vocal frills and well-arranged layers.

Treasure Hiding also includes two tracks previously only released on Volume various-artists compilations in 1996. “Circling Girl” is a barely alternate mix from the b-side version, but just as good. “Touch Upon Touch” is sparse and incoherent but beautiful. It’s similar to most of the other b-sides from the era. 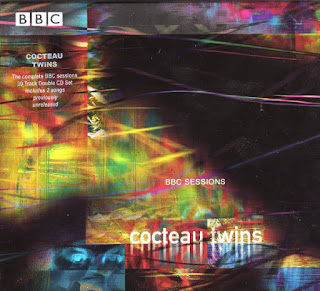 The BBC sessions from 1996 are both fairly good, but the only standout is “Golden-Vein”, which benefits from shimmering guitars and light percussion, making it better than the original acoustic version on Twinlights. Otherwise, there aren’t any other surprises, and nothing else is better than the album versions. It’s unclear if these sessions were recorded with the touring band, but the fact that I can’t tell isn’t exactly encouraging. “Fifty-Fifty Clown” (from Heaven or Las Vegas) is a welcome sight, but it sounds a bit tame and restrained compared to the album version. That said, all of the radio session versions lack depth, clarity, and refinement. Unfortunately, they also lack the intensity of a conventional live show, so there isn’t a lot going for them. “Violaine” might be the best of the bunch, but that’s just because it’s such a great song.

And that’s it! Well, sort of. There are a couple tracks missing, apparently due to “licensing and mastering issues”. (What could possibly constitute a “mastering issue”!?) “Need-Fire” from the Judge Dredd soundtrack (1995) is a bit of a loss. It’s more electronic than most Cocteaus songs and is almost as good as the average song on Milk & Kisses. The other missing song is a version of “Serpentskirt” with Faye Wong that was included as a bonus track in Hong Kong. Unless you’re a fan of Wong, you’ll barely notice the difference and you won’t miss it. It’s perhaps worth noting that Lullabies to Violaine, Volume 2 includes all the single tracks themselves, while Treasure Hiding skips them (except for the single edit of “Tishbite”) because they are redundant with the album versions. Nothing is actually missing. But as a result, the scores I’ve provided below for the singles mostly reflect the b-sides without much consideration for the single itself. 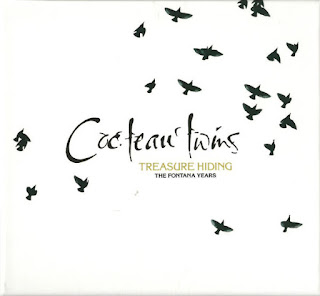 Cocteau Twins in the 90s were clearly a mixed bag. Four-Calendar Cafë was not their best work, but it was an interesting departure for them. Milk & Kisses was markedly better, so at least they ended on a high note. That said, unlike their peak in the 80s, the EPs, b-sides, and stray tracks from the 90s don’t match the quality of the albums from the same timeframes. Sometimes they get close or as good, but there are fewer exceptional tracks among them. However, there are still some gems if you dig deep enough. Not everything the Cocteaus touched was transcendent, but most of it still has a touch of magic.

Happy new year! I have not one but two new EPs to share! First is Sonnenfarbe, a collection of four semi-conventional songs about embracing your truth, escaping from darkness, and seeking a better place in the light: 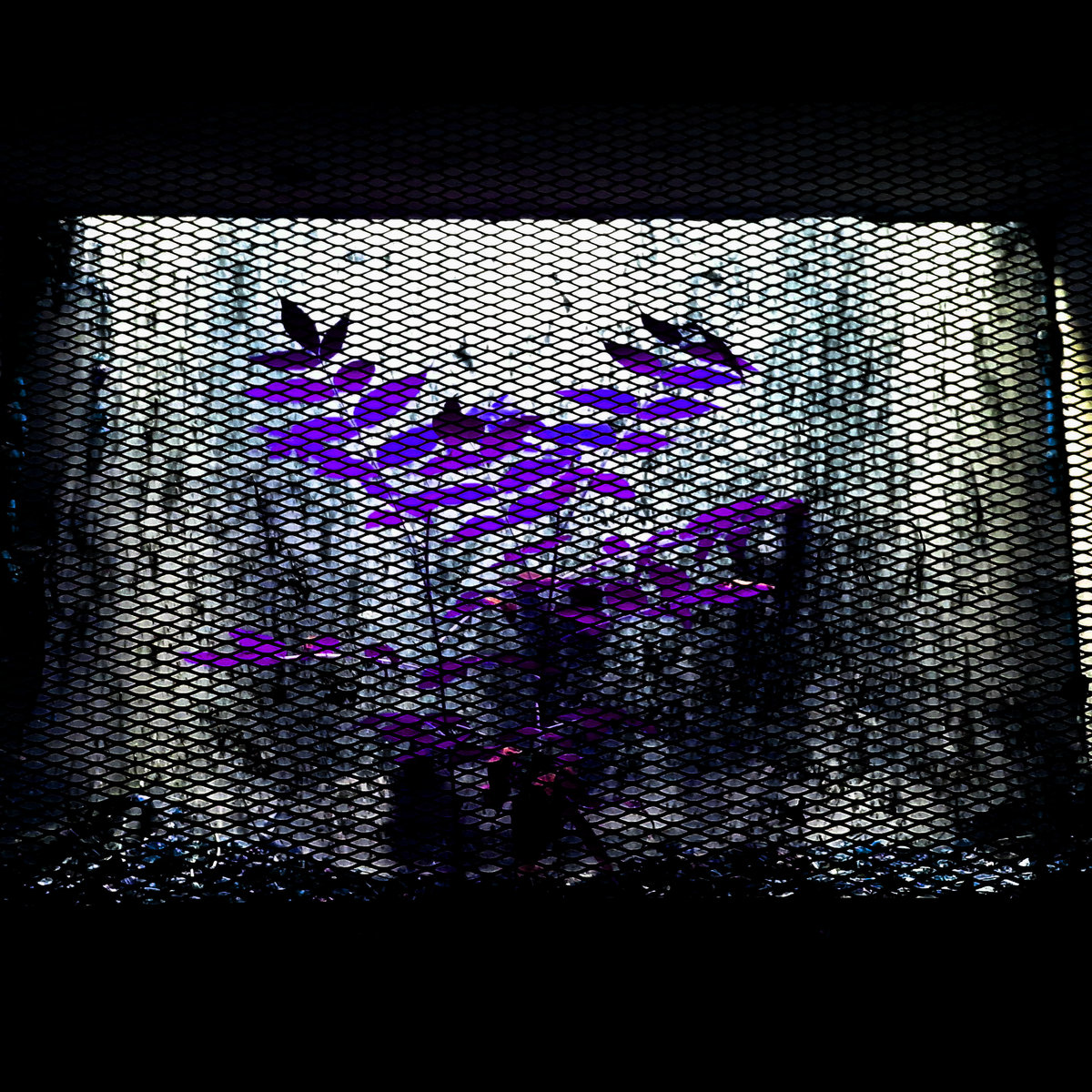 Second is Preserve the Absurd, which is something like the shadow counterpart to Sonnenfarbe. It consists of five instrumentals that are rooted in spontaneity, improvisation, and experimentation: 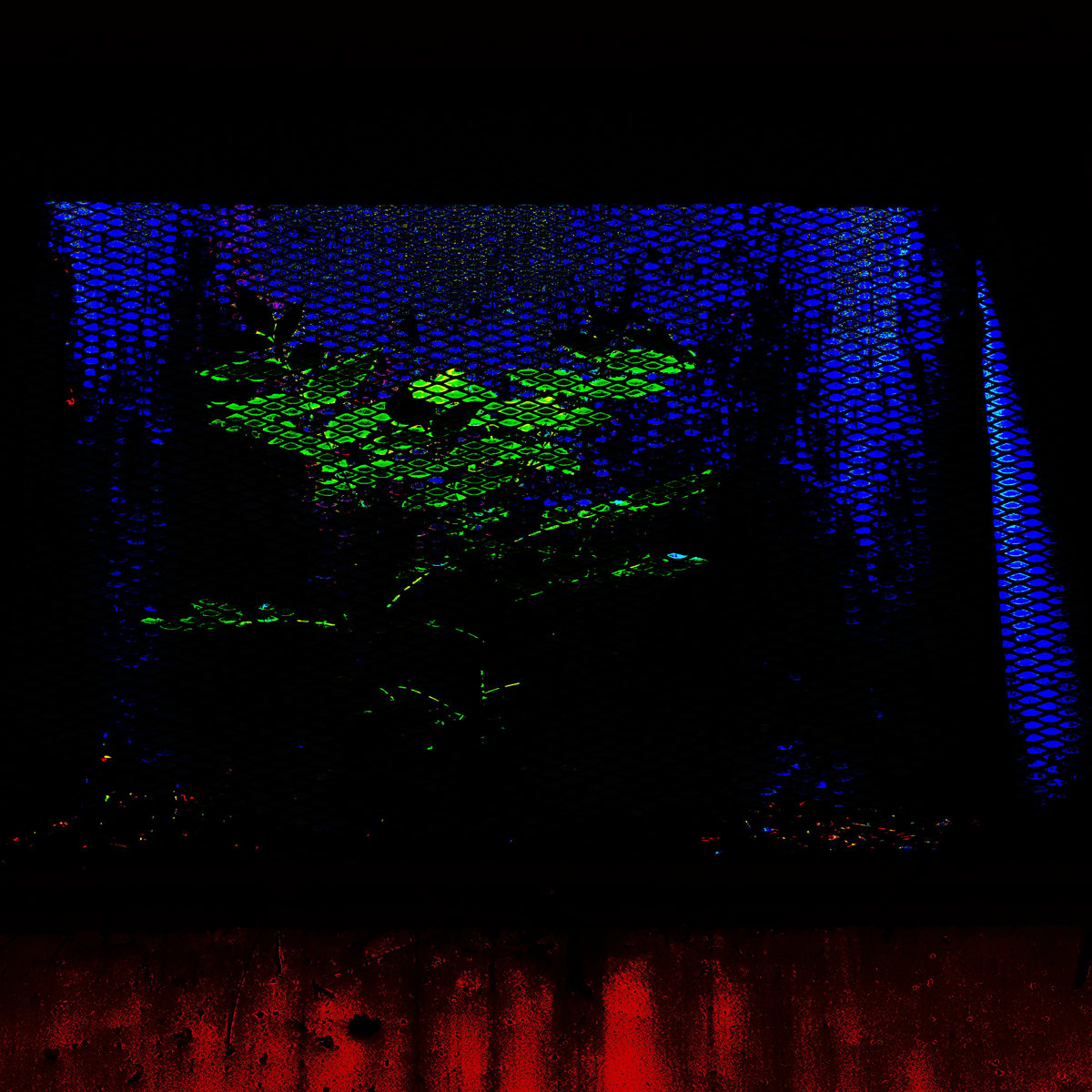